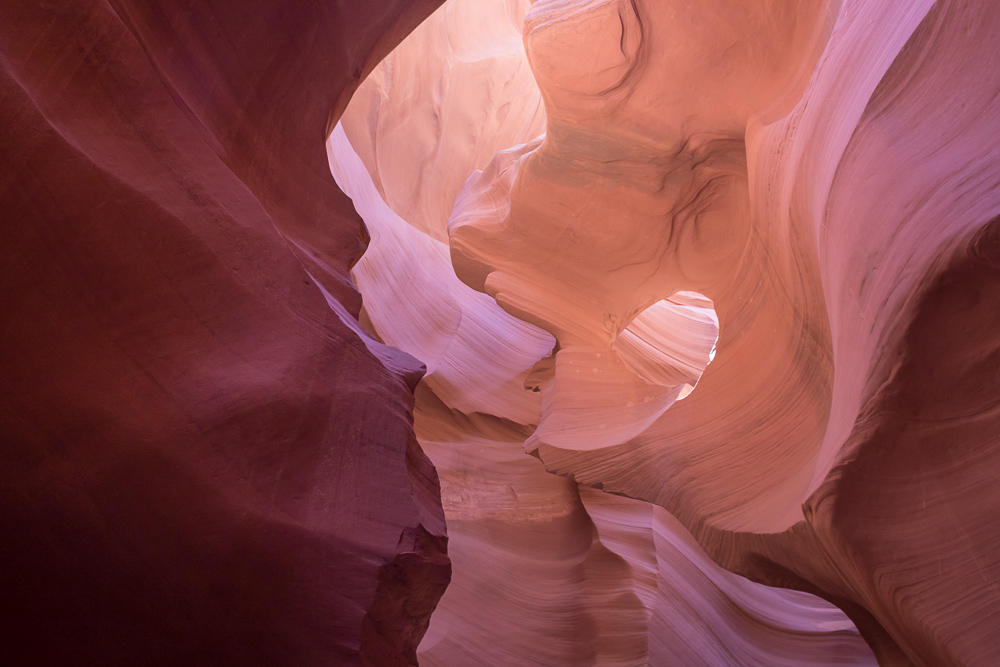 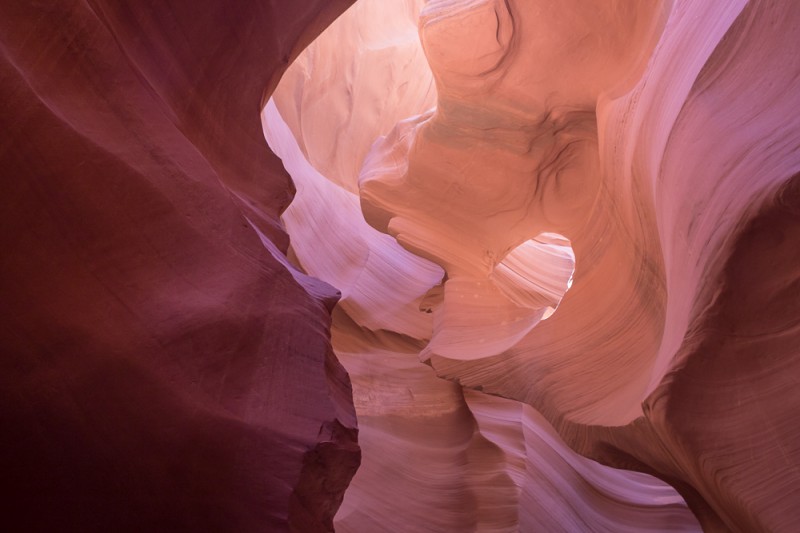 When you start looking up information about visiting Antelope Canyon , one of the first things that you will discover is there is an Upper and Lower portion of the slot canyon.  This post contains photos from my trip with a guided tour from Ken’s Tours that I experienced with my dad.

Researching Antelope Canyon was kind of funny to me, because I thought to myself, “wow, this place really exists!”  Funny because it seemed to be a mystical place not from this planet.   And not only that, but there are two separate Antelope Canyons?!

I think I must have seen a photo a number of years back of a narrow canyon with smooth yet gnarled, orange and purple striated sandstone walls that ended in abrupt jagged corners and a beam of volumetric light from above illuminating a small space on the ground.  It looked like such a special place.  I think a while later, my friend Sarah shared a photo of her visit to Antelope Canyon, and I realized, “wow!  people actually go there!  I want to do it too!”

Do you need reservations?

Next came the question – do you book in advance?  Or just show up?  I didn’t want to get all the way to Page and not be able to see the slot canyon.  The website for Ken’s Lower Antelope Canyon tours tells you to just show up.  So that’s what we decided to try, though I was worried that it’d be hard to get a spot on a tour if I had nothing booked in advance.

Lower Antelope Canyon was a very short drive from our hotel in Page.  Heading East out of Page on Highway 98, you turn left at Antelope Point Rd, which is the first left if you’ve taken Coppermine road out of town.  If pass the power plant/Navajo Generating Station, you’ve gone too far.

We didn’t have to worry about making a reservation.  We waited about 15 minutes for a tour to start, and the followed our guide Brian into the canyon.  I had read about the tour groups being crowded when doing research before the trip.  Our group had about 12-15 people, which felt like an okay size.  It would have been great if there were less people, but people were patient and waited for each other to take photographs.  Brian was also very helpful in managing the group.

Before you even descend into the canyon, you can see the layers of sandstone in the rocks that lead the way.  Foreshadowing.  The canyon isn’t obvious – from about 20 feet away, you can’t even tell that it is there. 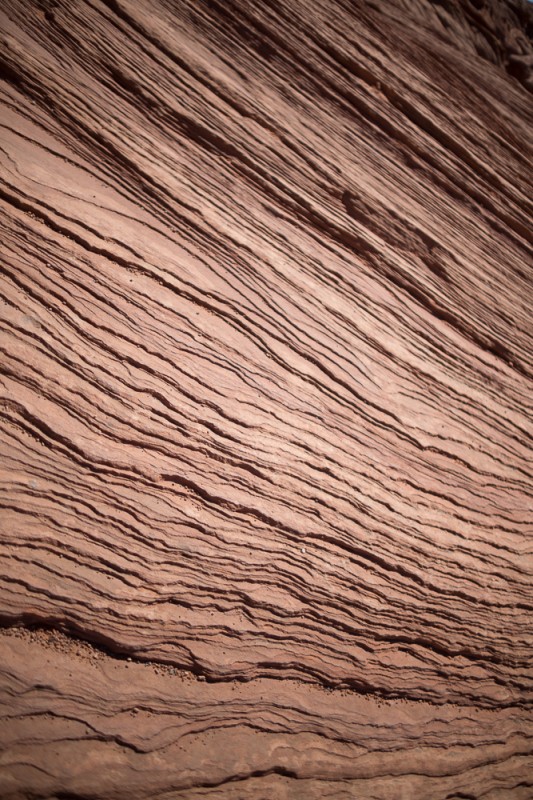 There are steel ladders leading down into the canyon.  Past ladders had been swept away by flash floods – eleven tourists were killed in 1997 when a flash flood hit.  In 2010, tourists were stranded for hours when another flash flood hit.  Brian explained that these days, they get a radio message from Navajo Parks if a storm is expected.  It’s amazing to think about the amount of force that such a huge rush of water can exert – but it’s the same type of forces that carved the canyon into the stone in the first place. 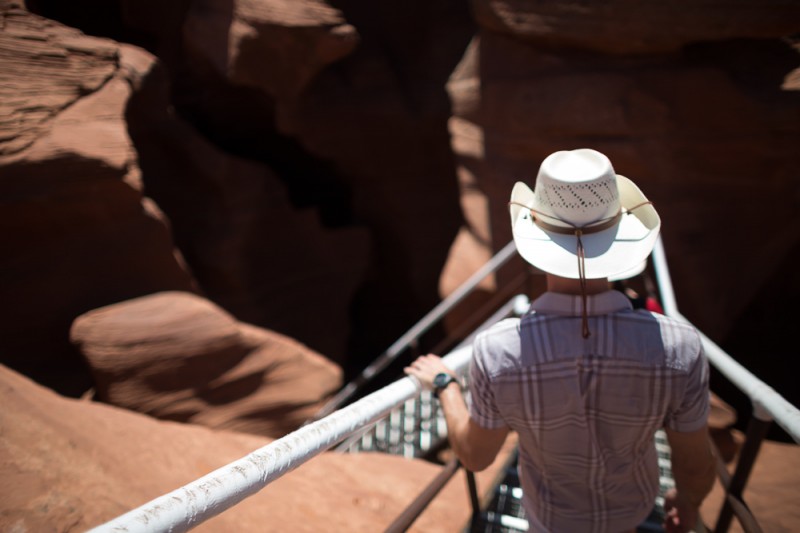 If you’re wondering how strenuous Lower Antelope Canyon is, it’s not too bad.  There is some climbing up and down ladders.  If you can handle that, you should be okay.  There are also some areas where there is not much head clearance.  I did bump my head lightly against some sandstone. 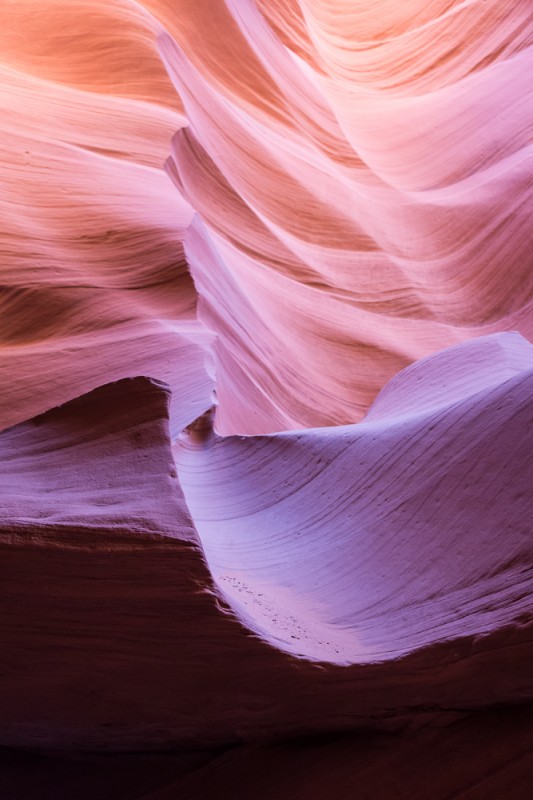 I admit, I started to get pretty giddy after we had descended the ladders.  “Wow, it’s so crazy that this is real.”  The rocks really do have amazing purple, red, and orange hues. 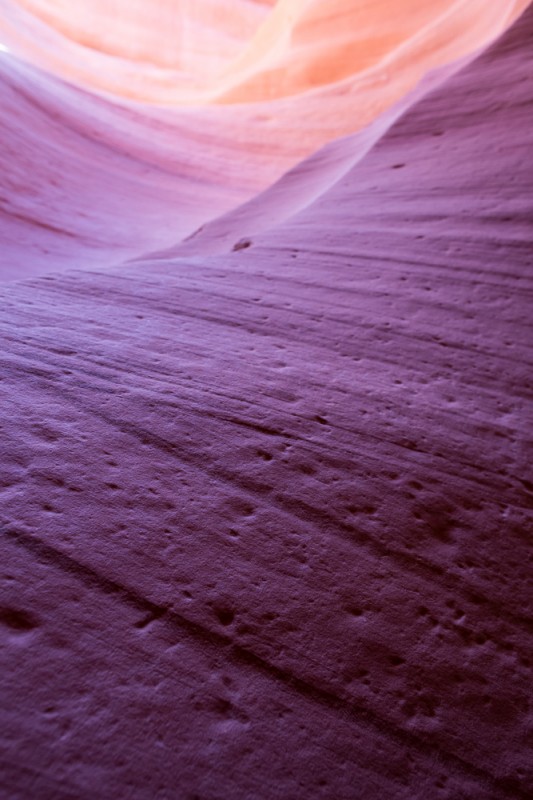 There are pits in many of the otherwise smooth sandstone walls – this is due to rock impacts during flash floods.  There are small bumps  on some of the walls also, caused by limestone deposits over the course of time. 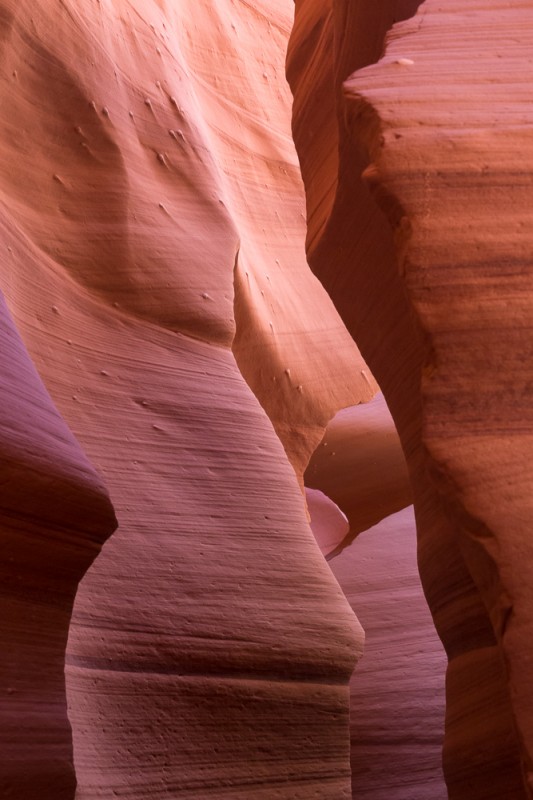 The canyon is not too deep.  It’s maybe 50 feet from the surface at its deepest.  In most places, you can look up and still see part of the sky.  It felt nice and cool inside. 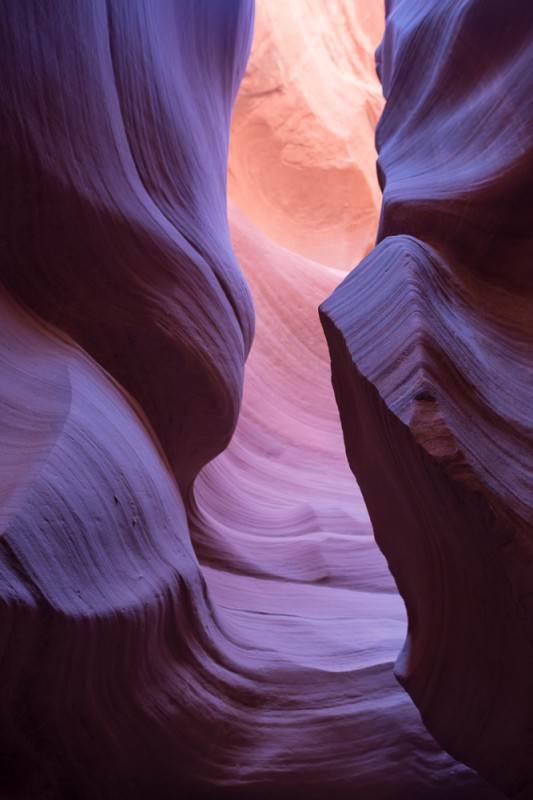 Brian was a nice tour guide.  He stopped briefly at many points to show us various features in the canyon – a profile of a lion’s head, a woman’s face, a fish, and other interesting shapes.  He offered to take everyone’s photos at a number of interesting points along the way – and made sure to set everyone’s iPhones on the “chrome” filter setting to make the colors pop.  He had some general pointers for SLR users also, though they were mostly targeted towards the crowd who leave theirs set on auto.  He said he didn’t have any photography experience before leading these tours when I asked.  He seemed to have picked things up pretty quickly in his three months of experience. 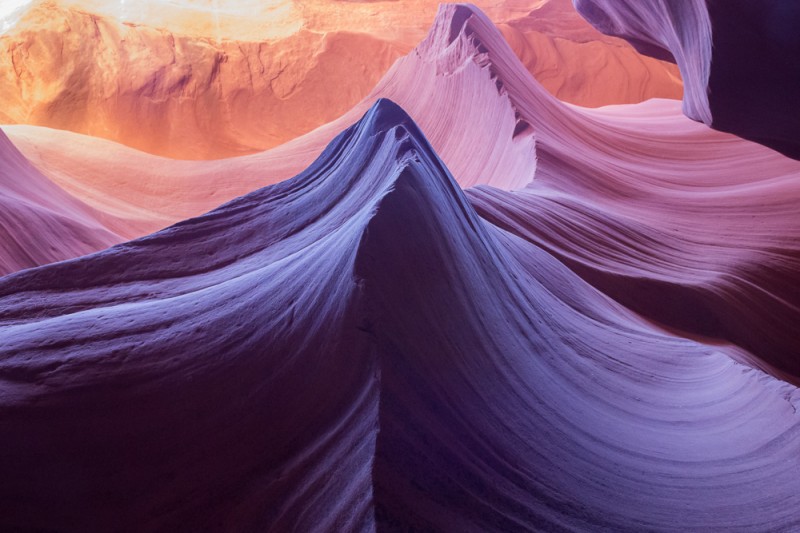 If you are curious what the lighting is like in there, I took most of my photos on manual mode with auto ISO.  I had the shutter mostly at 1/60 and aperture set anywhere from f/4 to f/13.  I tried some wide open just to see what the photos looked like, and I was disappointed.  All of the detail in the many layers of sandstone is worth stopping down to capture.   A tripod would definitely help, but you have to pay extra to bring one down.  I think this is due to space constraints.  (Oddly, as I mentioned in the beginning of this post, to qualify as a “photographer”, you need to have a tripod and put down $50 for a special permit.  This allows you two hours in the canyon without a guide where you can explore on your own.  Not too bad of a deal, but I wanted to be able to experience the canyon with my Dad, and I wasn’t sure if they’d let him accompany me.)  In the photo above, here were the settings: 24mm f/11 1/60s ISO12800.  Crazy high ISO and you can’t really see any noise.  The Canon 6D is nuts.  Even at full resolution, the photo doesn’t look too bad. 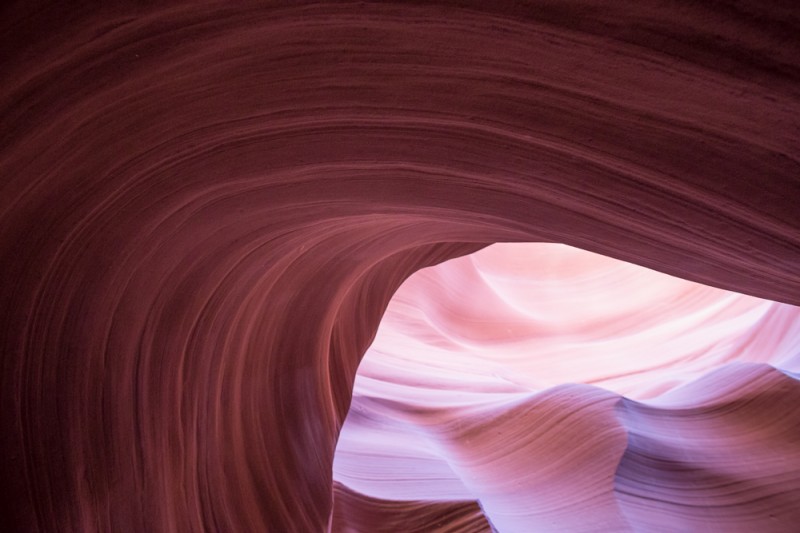 I think that Brian said that each line in the standstone represents about 1000 years.

There’s one light beam that comes into Lower Antelope Canyon.  In June, when we went, the sun shines through around 11am. 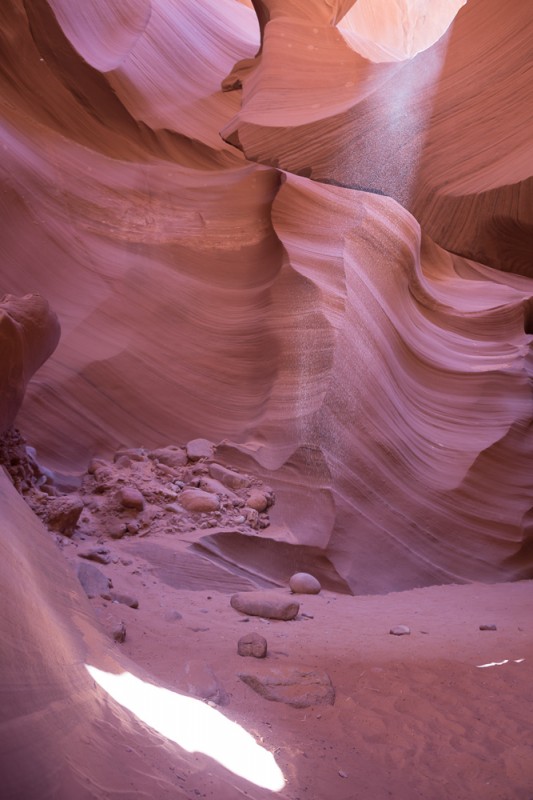 Brian threw some fine sand up in the air to make the effect of the light beam more dramatic.  I asked him about the sand in the canyon – he said that in some places, there is a foot of sand between our feet and the rocks below.  When flash flooding occurs, the sand is all washed away by the water.  People dump sand back in to make it easier for us to walk through. 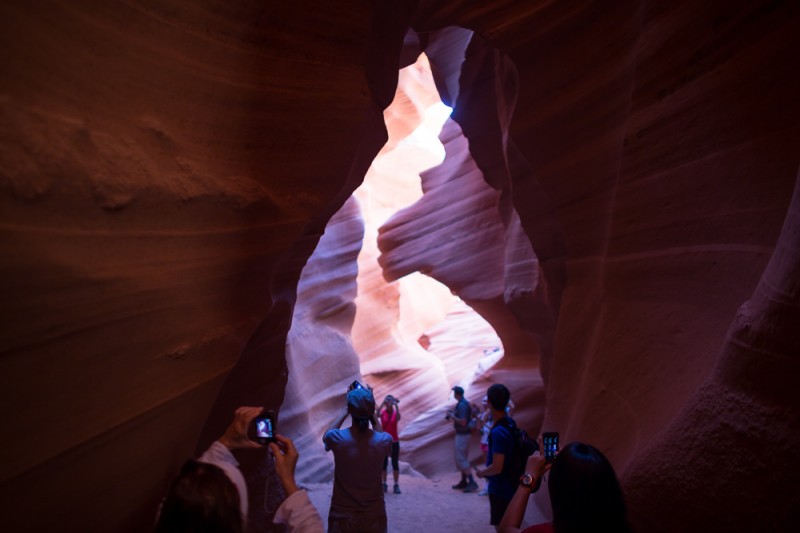 Here’s what the canyon really looked like most of the time.  Though there were a decent number of people in our group, we all took turns when we got to special areas that would have looked better empty.  I remember there being a few people from Singapore, a couple from Italy, some Americans, and a few others.

The tour lasted about an hour.  The ladder out of Lower Antelope canyon was much shorter than the one we descended on the way in.  There are a few dinosaur tracks on the surface that Brian showed us on our walk back to the ticketing building.  We thanked Brian, said “ciao” to the Italians, and were then on our way to Monument Valley.