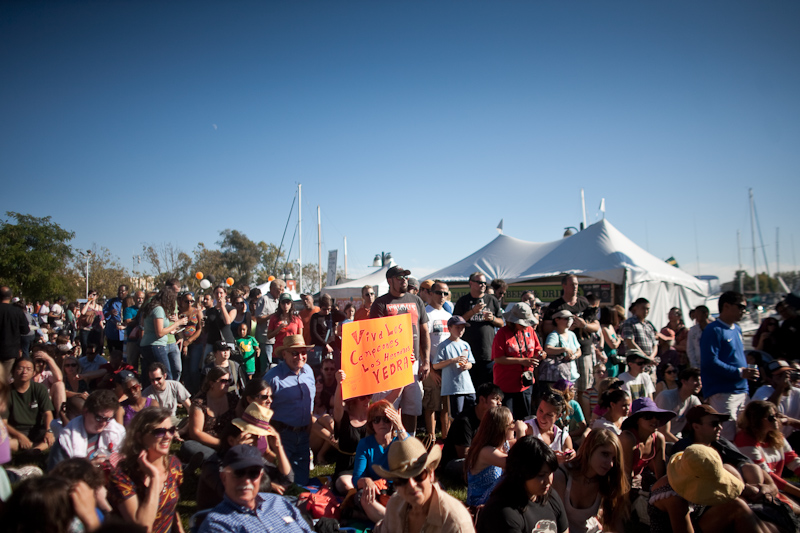 The stage was in a slightly different spot on the green at Jack  London Square, but the crowd showed up just the same for Eat Real Festival’s 2012 Flying Knives Steer Butchery Competition.   The competitors were familiar, but with some changes: The defending-champion Yedra brothers, formerly of Marin Sun Farms  are now working for the BN Ranch team.  Dave the Butcher, Josh Kleinsmith and Adam Tiberio all joined forces once again, and the Butcher’s Guild put together a formidable team.

The crowd gathers, waiting for the start of the competition.  A woman holds a sign: “Viva Los Campeones Los Hermanos Yedra” 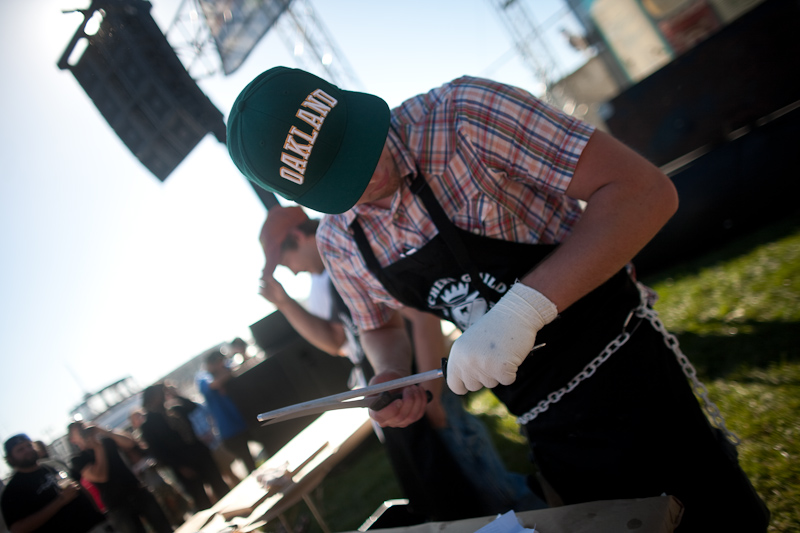 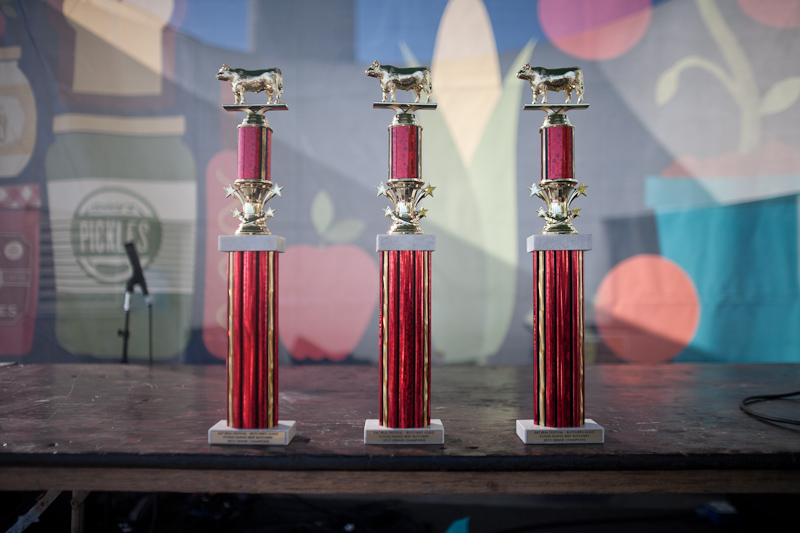 The Yedra brothers hoist a hindquarter onto the hook.  These weigh about 200lb. 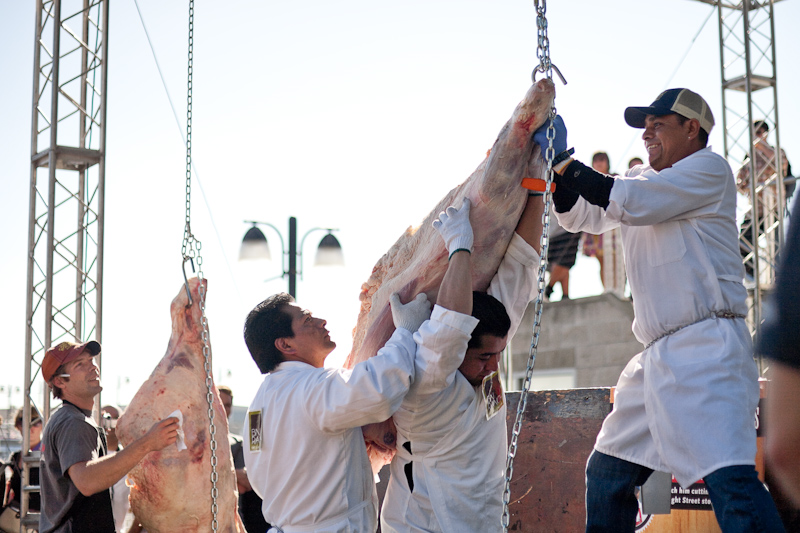 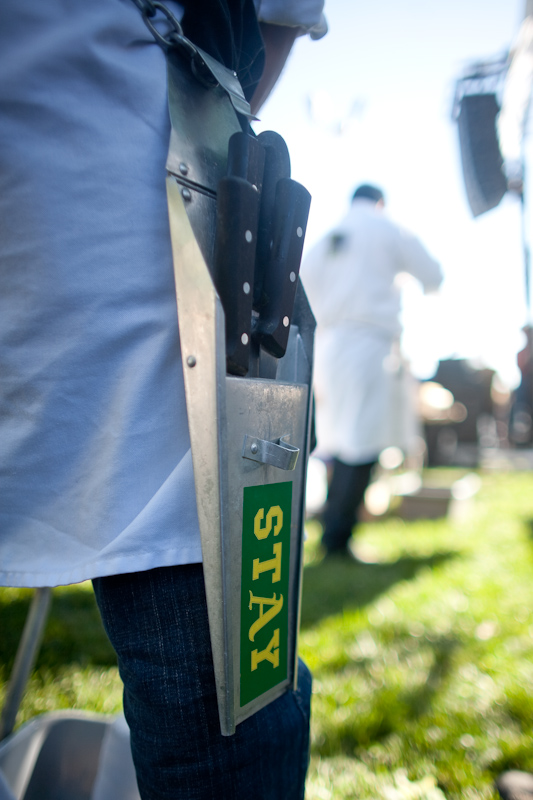 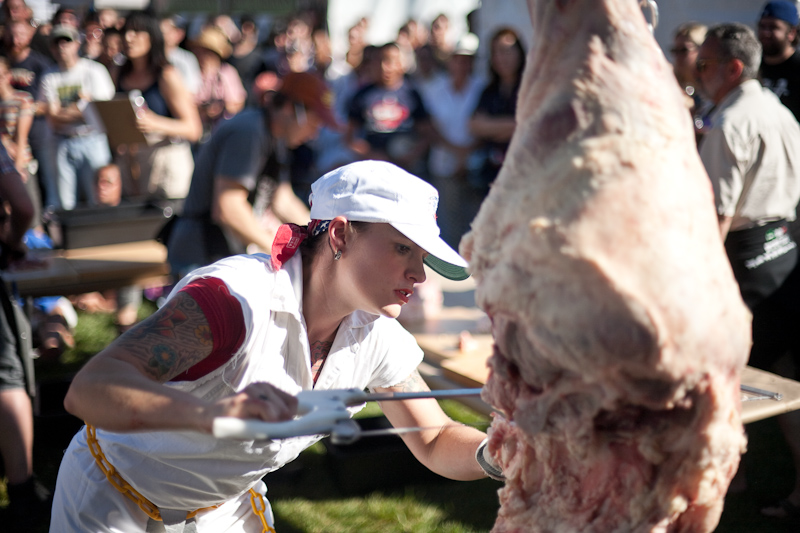 The Yedra brothers start getting to work as well: 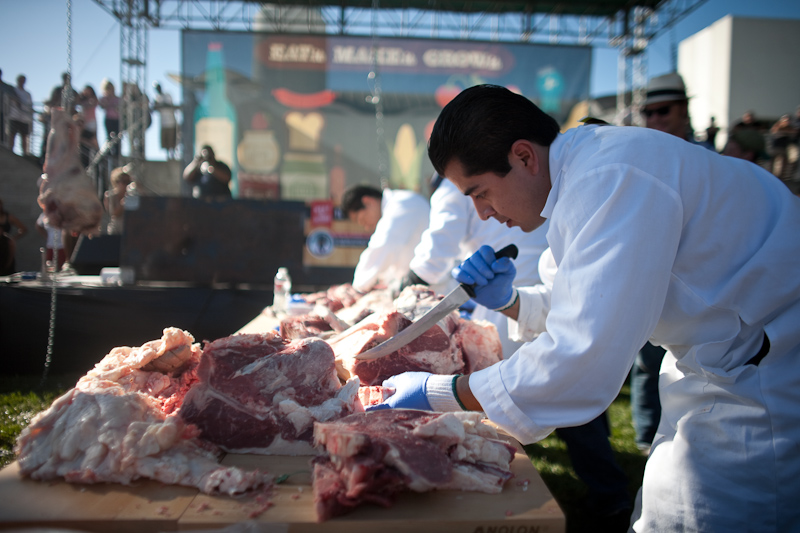 At one point, a festival attendee started resting his arms on the butcher’s table and was interfering with the competition.  Katy Quinn politely asked him to give them some space: 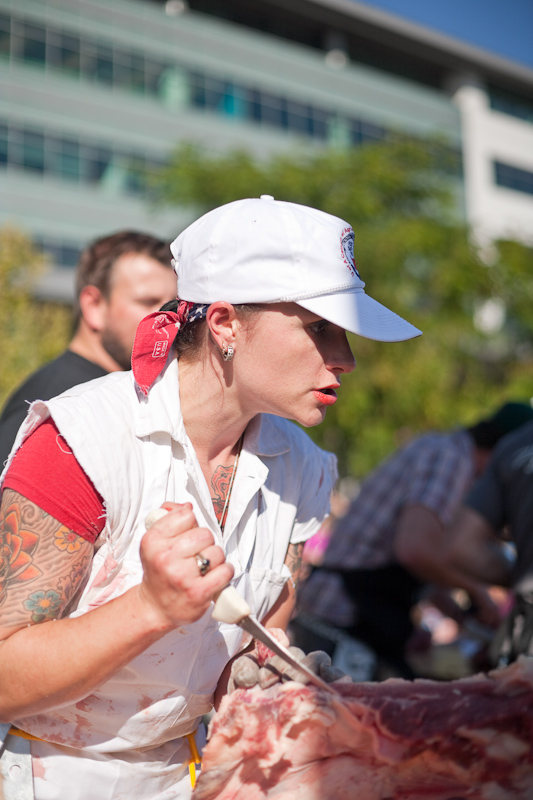 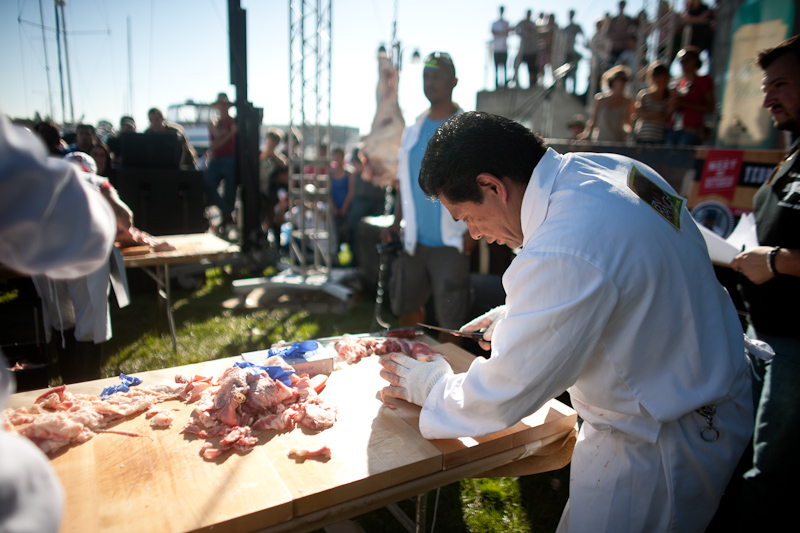 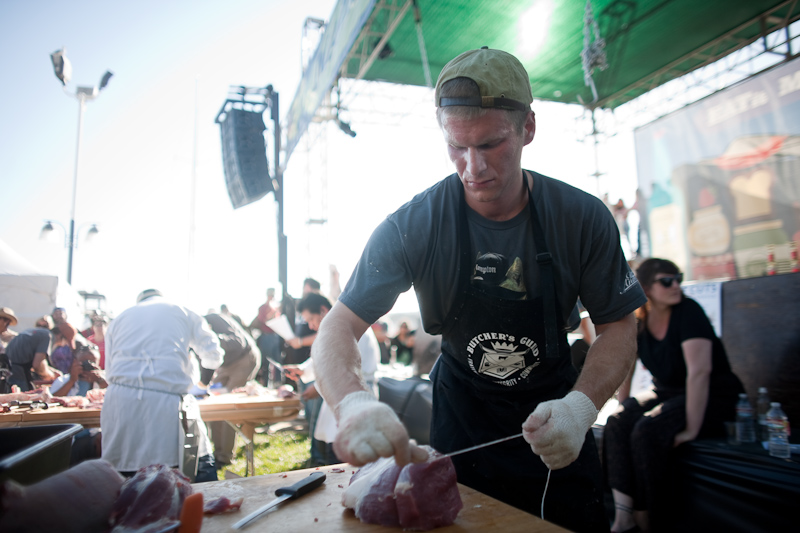 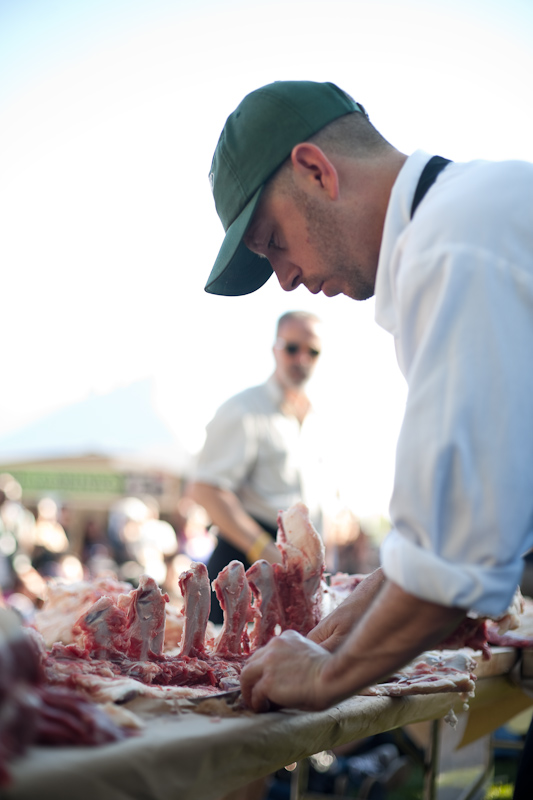 The crowd is having a good time: 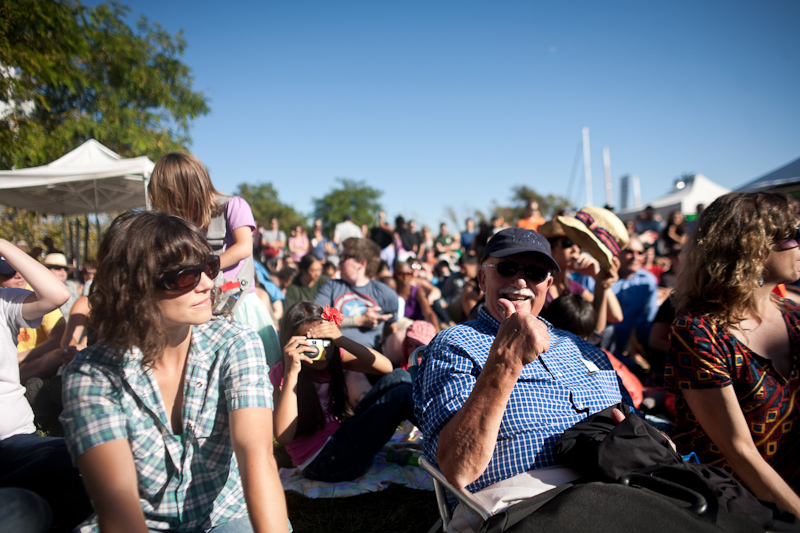 The work of the Yedra Brothers: 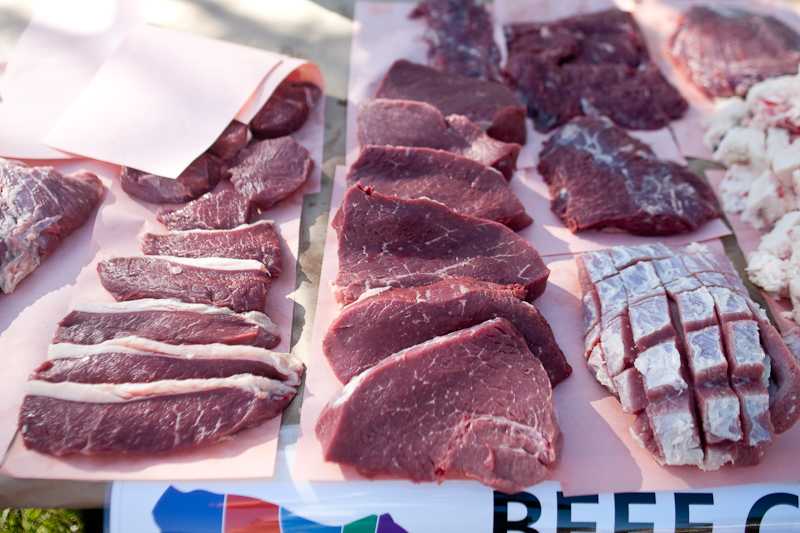 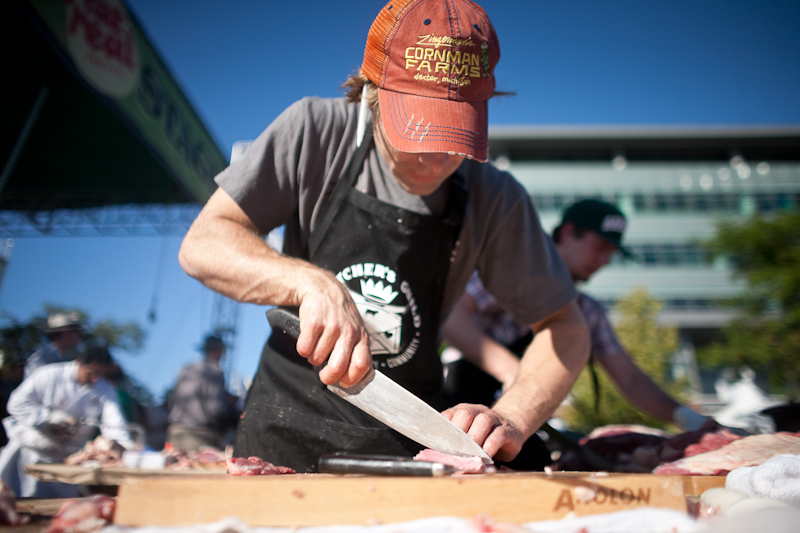 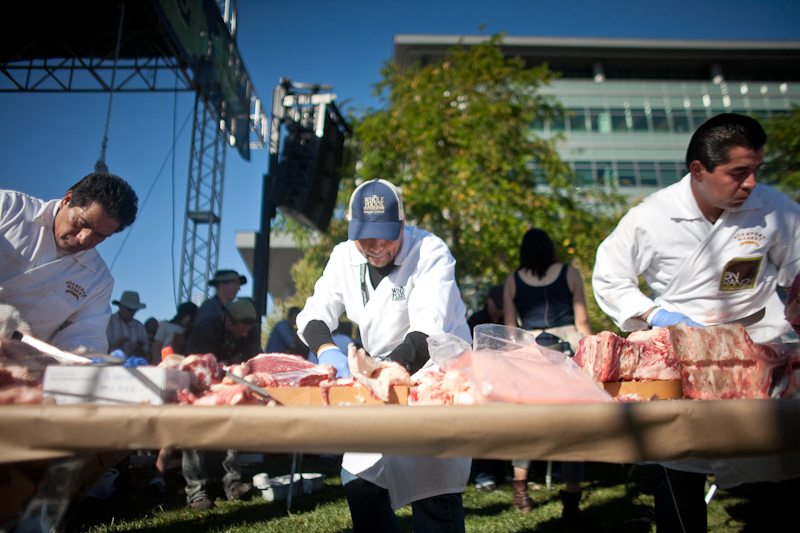 Dave the Butcher of Marina Meats was mic’ed up and performed the dual roles of commentator and butcher: 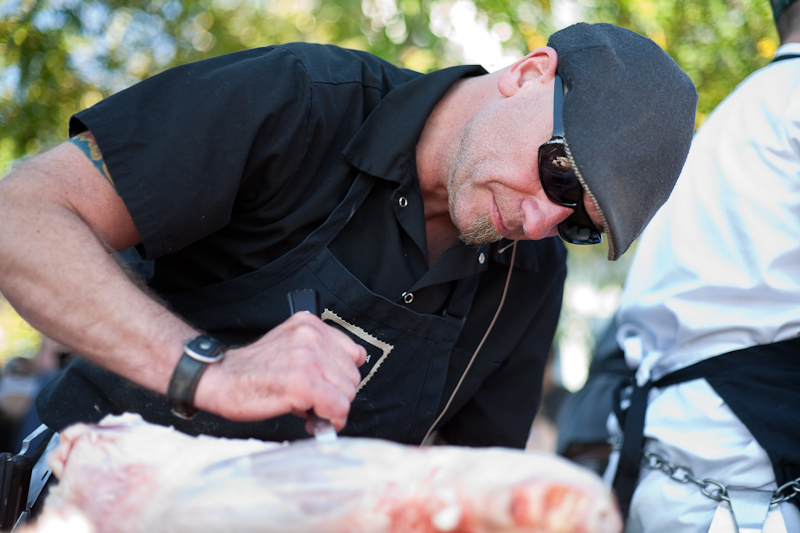 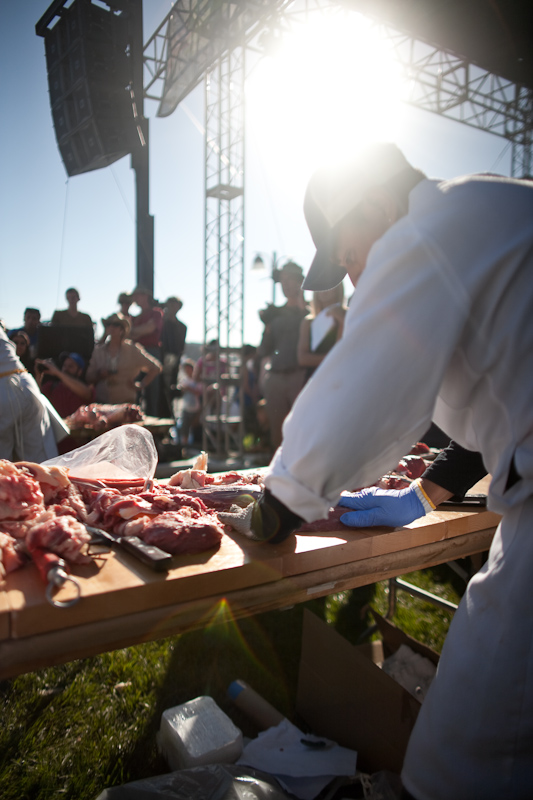 Dave the Butcher laughs at a comment from Anya while cutting away: 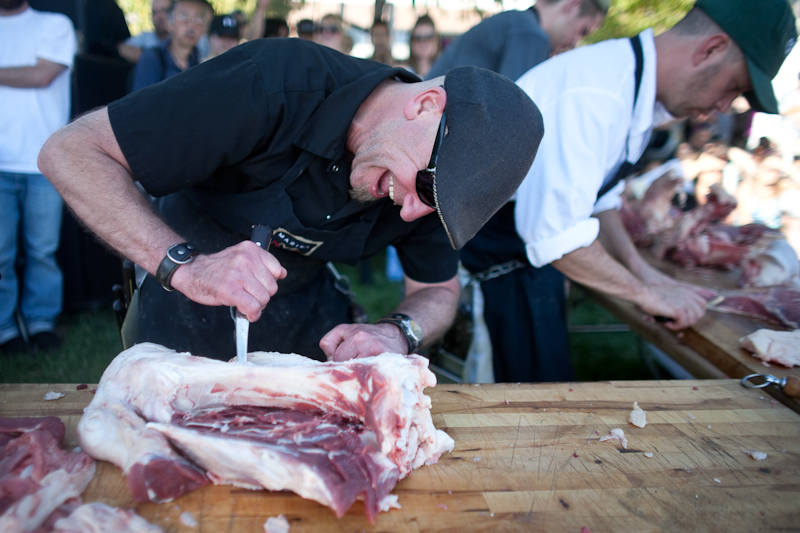 The Yedra Brothers had quite a fan club: 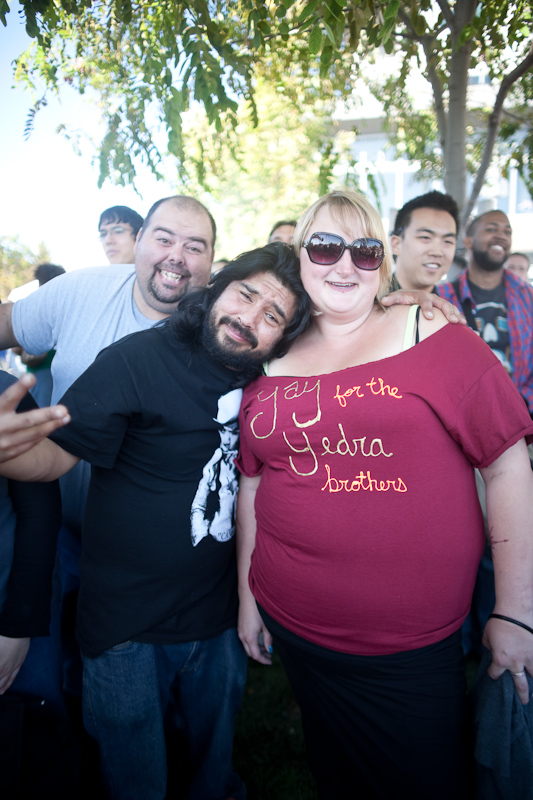 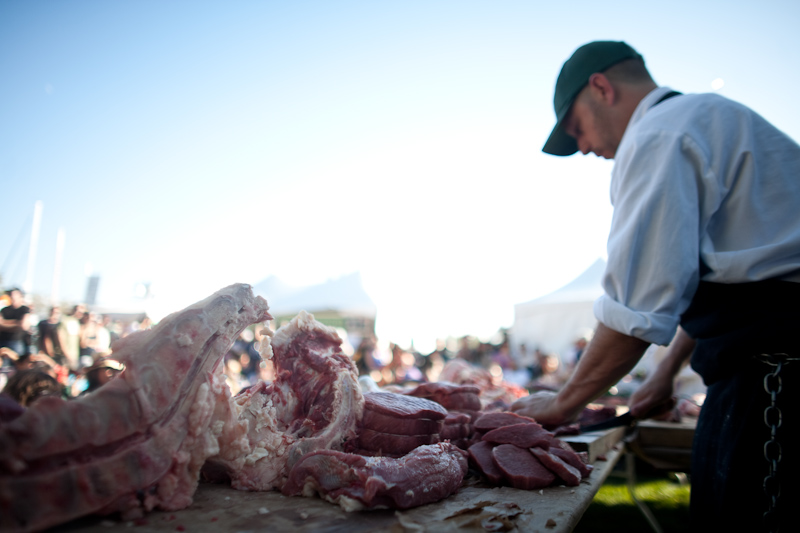 And they came well-prepared.  Labels and kale. 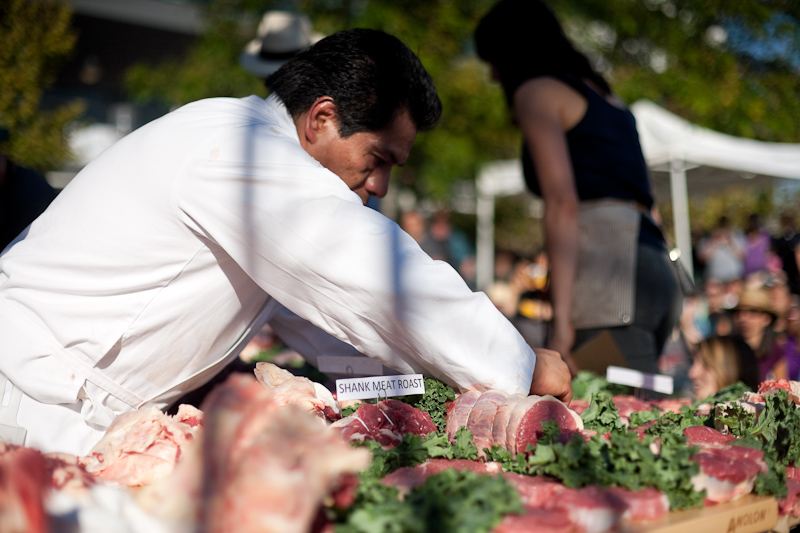 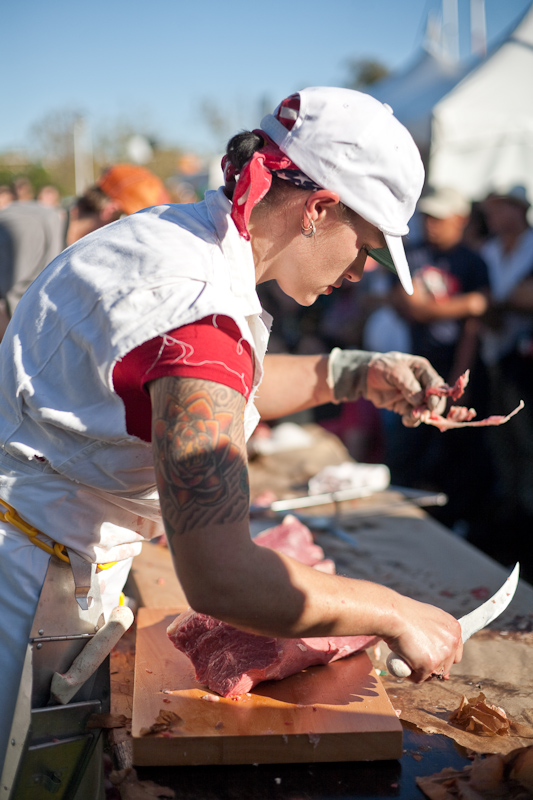 Cuts of beef, labeled and on display by the Yedra Brothers: 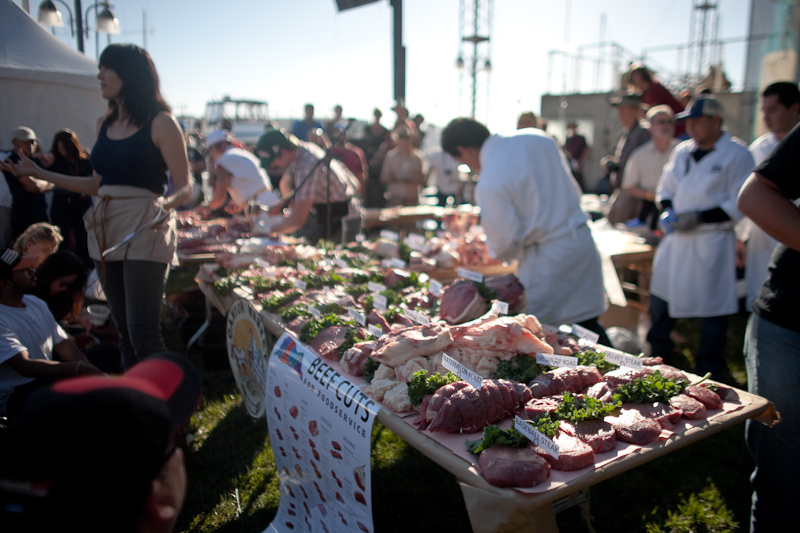 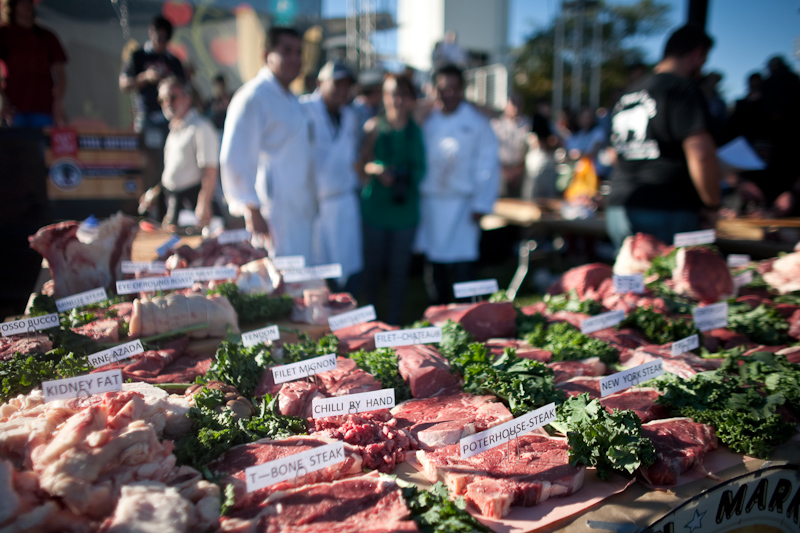 The Butcher’s Guild team celebrates after breaking down the hindquarter: 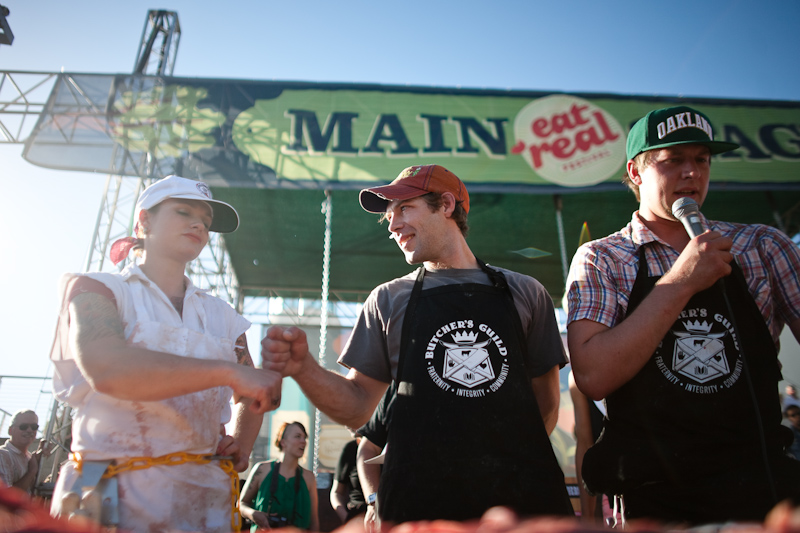 Anya Fernald hands the microphone to Oscar Yedra to talk about what his team did: 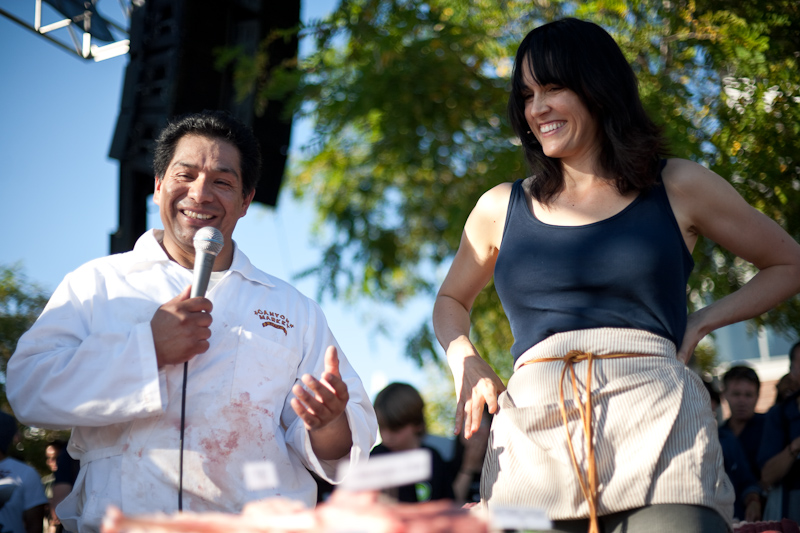 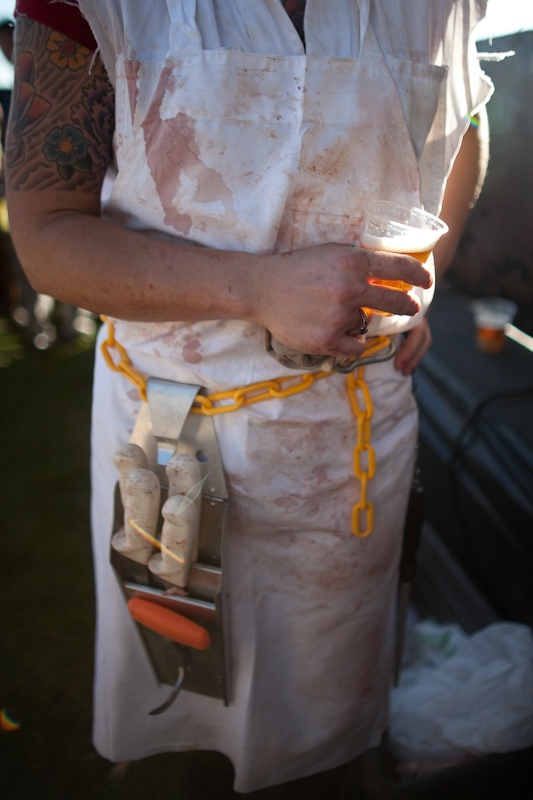 The Yedra Brothers were declared champions, once again.  This was their 4th win in a row. 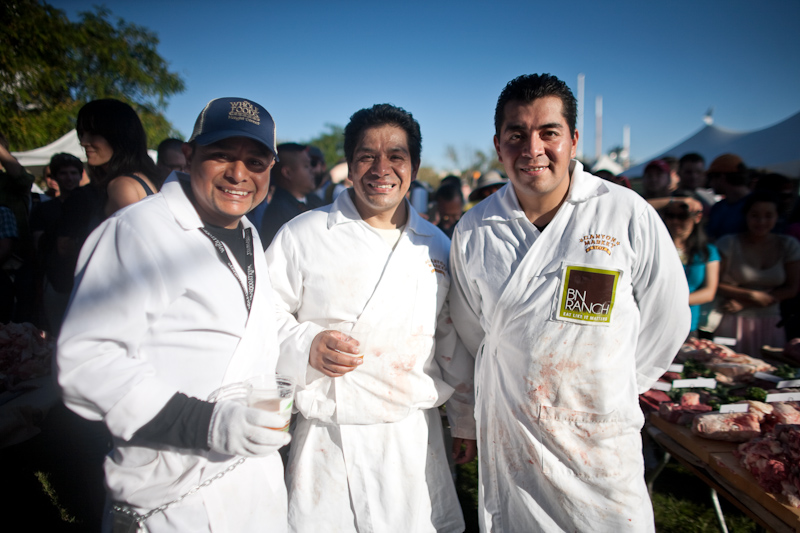