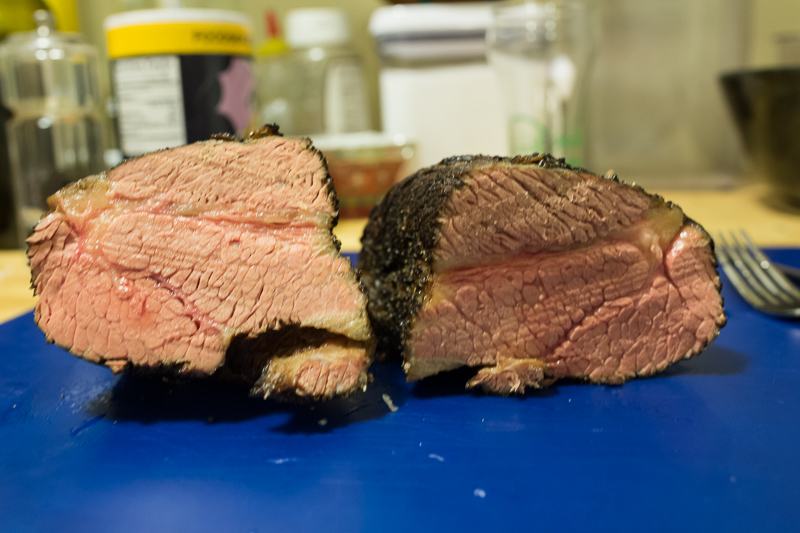 Sous Vide Brisket #3: I haven’t posted #2 yet; maybe that will happen later.  This was grass-fed organic brisket that cost $9/lb.  I double bagged it with nothing added, and then put it in the water bath for 72 hours at 54.5C (130F).  I was targeting the bottom of the medium-rare range.  It was a much thicker cut, and the point turned out sorta dry and with a weird texture.  The rest of it was good though.

It looked ugly coming out of the plastic bag. 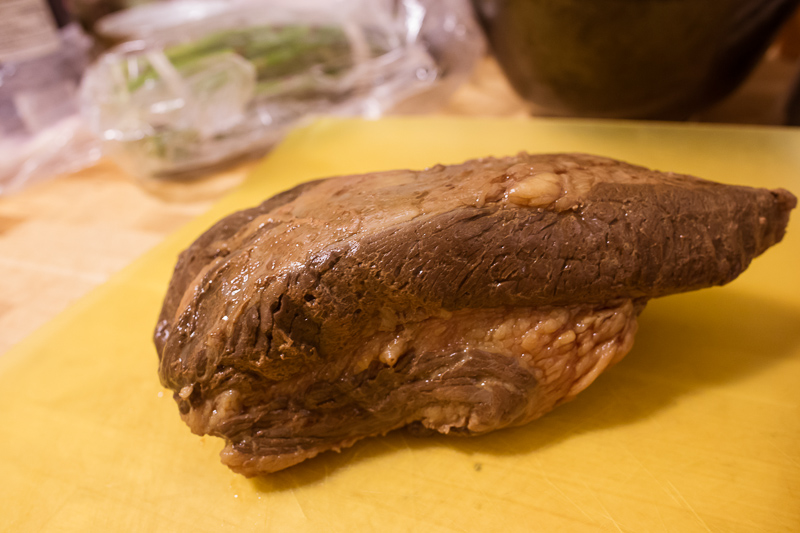 I added salt and pepper and then seared it with the blow torch.  Looking much better now. 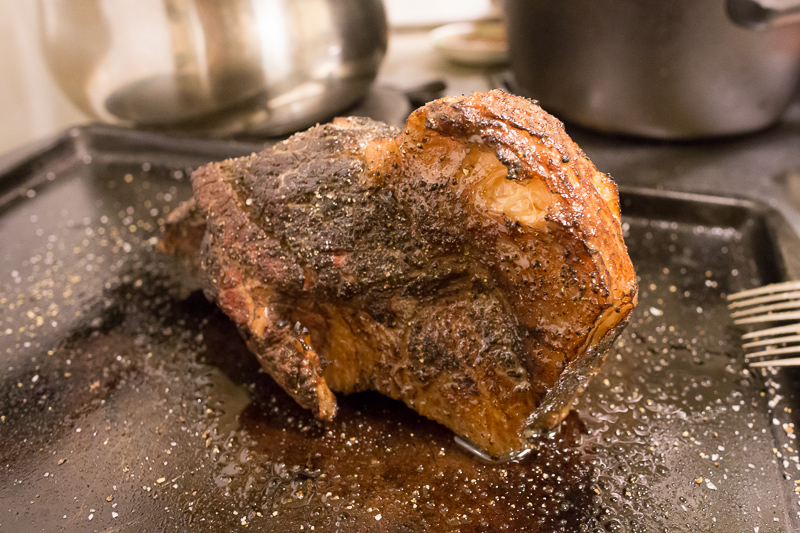 Texture was soft to the touch, and the muscle fibers could be torn apart manually.  I made a gravy by reducing the beef juice, and it went well with the brisket. 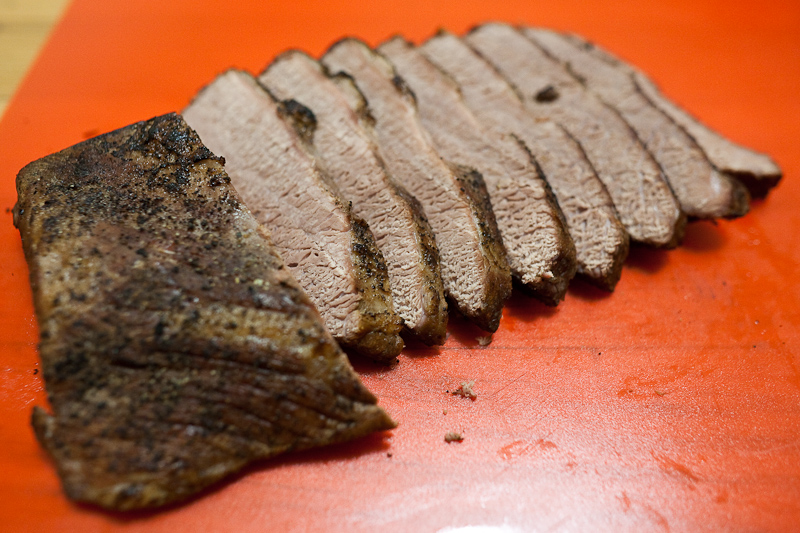 I’ve been conducting some sous vide experiments lately.  My sister bought me a deep fryer a while back, and I decided to convert it into a sous vide machine.  I guess it can still function as a deep fryer, but I’ve been cooking food in water instead of oil..

I’m pretty new to this, so I expect to have some not-very-good food.  This was my brisket experiment, inspired by some delicious smoked brisket at a recent birthday BBQ.

Here’s the raw cut of meat, about 1.6 pounds.  The other side of the brisket did not have much of a fat cap, I guess it had been trimmed away?  I seasoned it with a bit of salt and pepper and sugar.  I think next time, I will skip the salt. 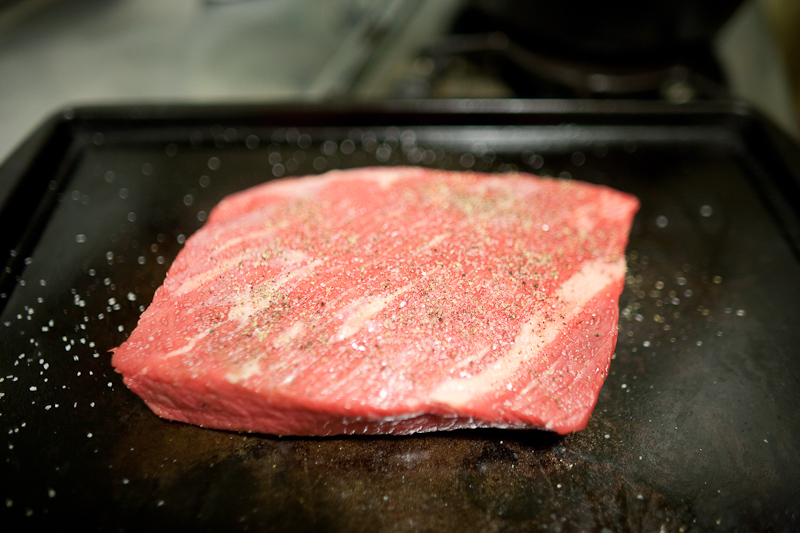 I put the brisket in the sous vide cooker at 62.2C for 46 hours.  Douglas Baldwin has a couple of suggestions for brisket, and I chose a temperature close to the French Laundry’s.   I elected not to brine, because, well, I didn’t feel like it.  I added 1.5 tablespoons of butter to the bag and put it in the machine.

Here’s the beef after 46 hours.  It shrank to about 60% of its original size. 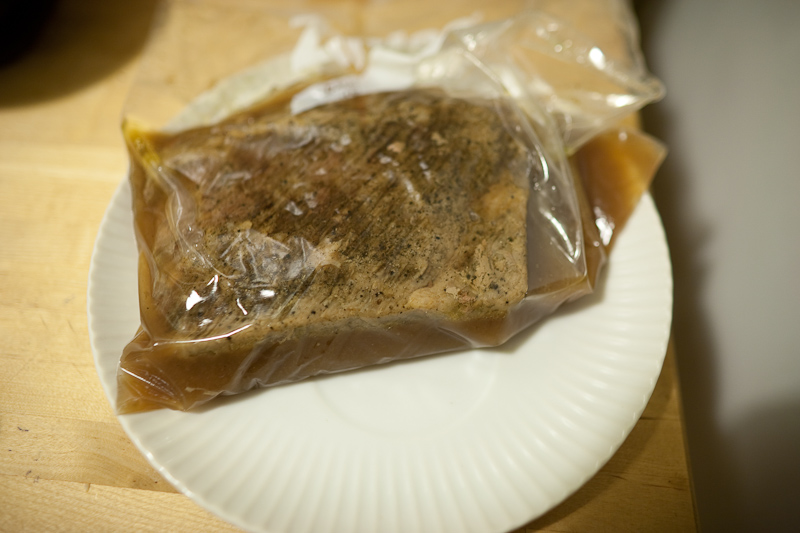 I saved the liquid left over for gravy: I browned an onion and then mixed the liquid in and let it reduce for a while.  I dried off the meat with paper towels and then seared with a blowtorch. 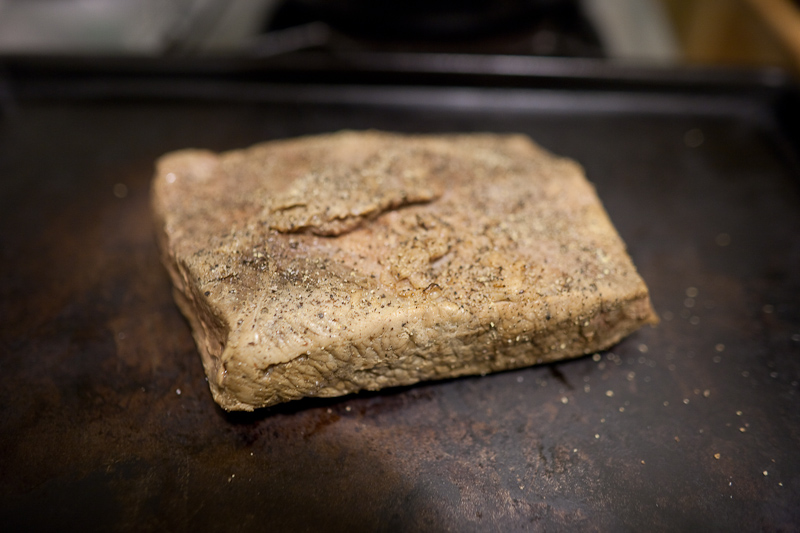 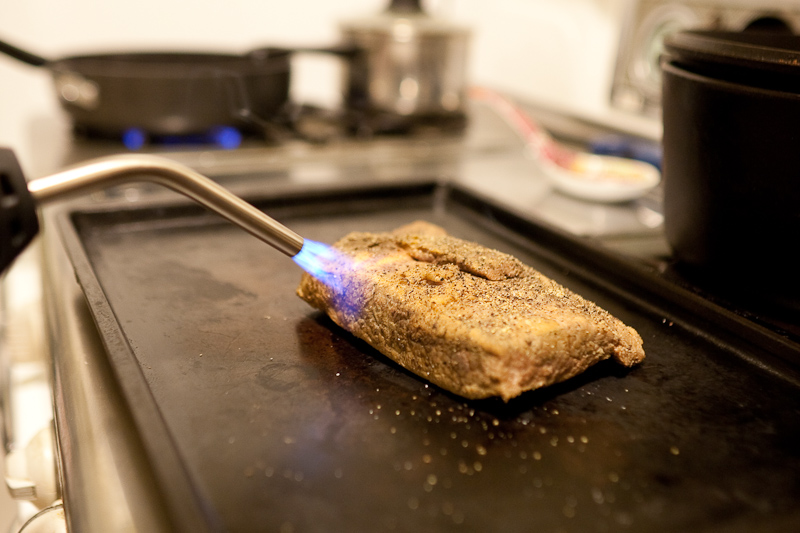 The blowtorch method is new to me, but I think worked pretty well. 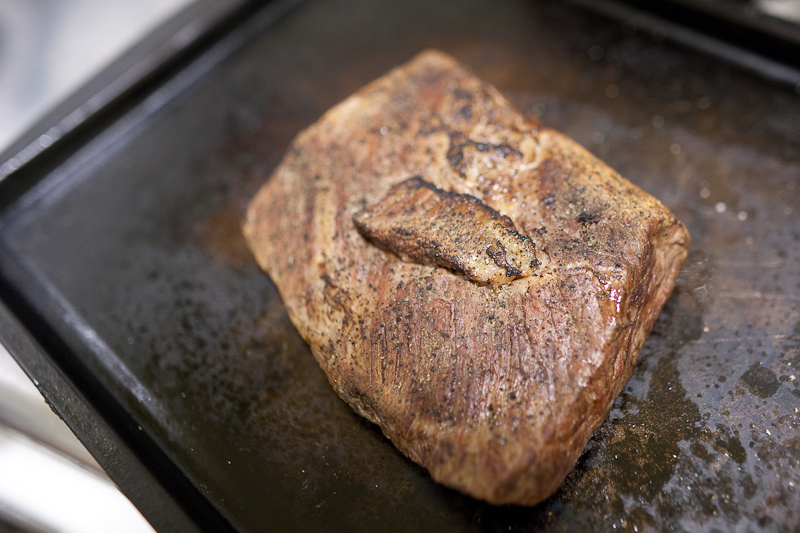 The beef was a little grey; I think it was cooked about medium to medium-well.  Some of it was starting to become flaky.

It tasted great, but was a bit dry.  But not too dry.  It was probably comparable in texture to the brisket that I had from the smoker.  Paired with the gravy, it was delicious.

Changes for next time: