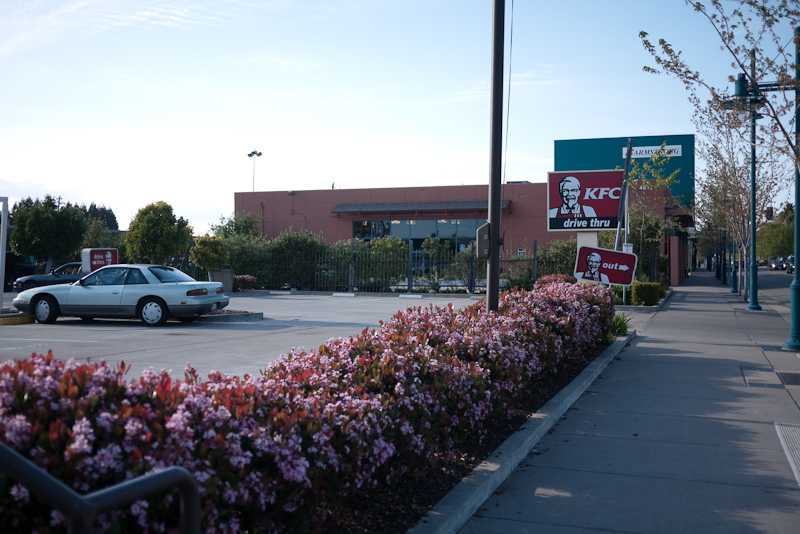 we decided to try the kfc doubledown today.

We went to the KFC on 45th and San Pablo in Oakland:

We ordered our sandwiches and inspected them.  Mine didn’t look as “disgusting” to me as some reviewers (also check out a little side story here) have described:

but it didn’t look too good either.  It tasted super salty, and the flavoring on the chicken totally overwhelmed everything else in the “sandwich” (rox informs me that according to MW, it’s not a sandwich, but a “sandwich” because there is no bread to be found).   you could make out a little bit of the cheese via texture and if you tried, you could taste the “colonel’s sauce”.  It didn’t taste horrible though.  The bacon probably wasn’t necessary – I could hardly tell it was there.  I was scared that I’d get sick.  but I didn’t.

My friend Israel didn’t have much to say.  He just shook his head.

We also got 2 biscuits for 99 cents.  Israel got honey and butter to put on the biscuits, but it was actually “buttery spread” and “honey sauce”.  11% real honey!

I saw these three guys walk in.

(note: Israel made the astute observation that their menu is basically only combos – no individual sandwiches.  Perhaps the margins are just that much higher on the combo meals?)

They were definitely getting double downs – you could tell by their pants and their fixed gear bikes.

and they did.  I can’t blame them though because they were there for the same reason that we were.