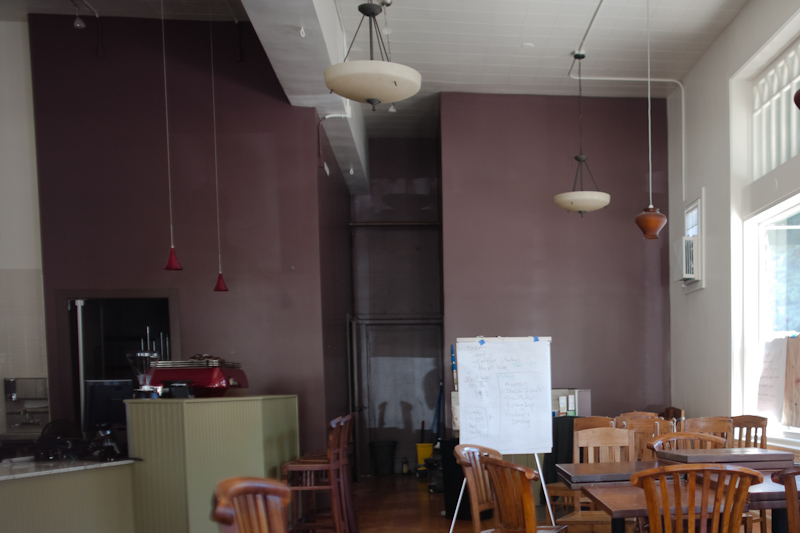 update 3 (September 2012): Cafe Zoe is now Old Brooklyn Bagels.  The same la marzocco machine is in there though..

update 2: samples today but real opening is on sunday the 20th 7am-7pm

update: via teh twitters, @cafezoeoakland is prepping for a 6/18 opening, pending inspection.

peeked through the window of cafe zoe in rockridge and saw this:

there hasn’t been a lot to be found about cafe zoe (6000 college ave) on the interwebs, which had been vacant for quite some time (one year? two years?)  Apparently it used to be Baby World but they seem to have moved over to the Temescal neighborhood.

Anyways, back to the photo: Rockridge is a neighborhood with a pretty high cafe per resident ratio, but I’ve yet to find a place with espresso that I really like.  On College ave, there’s Cole Coffee (who have a consistent gathering of people sipping coffee outside), A Cuppa Tea, Spasso, and Peaberry’s in Market Hall.  I don’t remember what the espresso was like from Bittersweet or Hudson Bay Cafe, but the fact that it wasn’t memorable probably means something.  Though each of the places have their draw, I wouldn’t go to any of just for an espresso unless I really needed a caffeine fix.  The nearest place to me is the relatively new Remedy Coffee in Temescal, who do a really nice job with Ritual’s beans.

The machine in the photo is a La Marzocco FB80, a dual-boilered, PID’ed out crema-churning beauty (with some nice detailed reviews) that runs somewhere between $11,000 and $17,000 depending on how many groups you want.  A little searching online found this job posting which indicates that Cafe Zoe will be serving award-winning Ecco Caffe coffee (whose coffee I have not tried but hope to soon, as they are planning to relocate their roastery and open a cafe in portrero hill).

I’ve seen this machine before at the Blue Bottle in Williamsburg.  So, I’m excited.  serious coffee + serious machine + a job description that implies a serious commitment to coffee (“The espresso bar was designed with the barista in mind! Super equipment, great workflow, and the best view in the house.”) probably means serious coffee.

One thought on “cafe zoe in rockridge opening soon with serious espresso?”