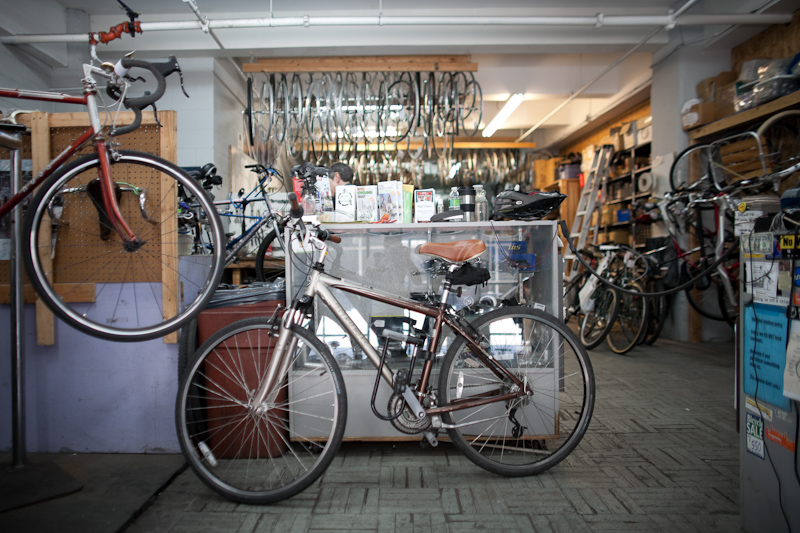 I was in New York for work a couple of weeks ago and decided to take some time off to wander in the city.  I embarked on a self-guided tour of bike shops and coffee shops in brooklyn and manhattan (with the much-appreciated help of Anita from Brooklyn by Bike who led me to the New York Times Interactive Coffee Map) and took a bunch of pictures.  whenever possible, images were shot at ISO 50 and wide open, just because.

I asked about bike rentals and bikesnobnyc was kind enough to suggest that I check out recycle a bicycle.  I went to their DUMBO location (Recycle A Bicycle, 35 Pearl St, Brooklyn)  They had only two bikes available and this is the one I got:

Chris from the shop hooked me up with the free official NYC cycling map.

I took a few pictures outside:

and along the way.  It felt weird trying to balance on this bike – it had a coaster brake and I wasn’t used to the way-upright handlebars.   Riding the cruiser kind of made the ride more enjoyable, though, because it allowed me to just kick back at a slower pace and enjoy the ride.

and then pedaled towards Cafe Grumpy in Greenpoint.

the weather was ridiculously beautiful.

the espresso at Cafe Grumpy (193 Meserole Avenue, Brooklyn, NY)  was good and the people very friendly.

Cafe Grumpy was larger than I expected.  It was relatively crowded with people working on their laptops and they had a beautiful bathroom window:

I headed towards B’s bike shop (262 Driggs Avenue, Brooklyn, NY) next in Williamsburg.

took a picture along the way:

B’s Bikes was a crowded little shop that seemed to be getting a lot of business.  I told the people inside about my plans for the day and they happily mentioned a few neat bike shops in Manhattan to check out.

I rode the cruiser down to King Kog (455 Graham Avenue, Brooklyn, NY) next:

There was definitely a different vibe here with more bike-lifestyle items on the shelves including a hilarious “One Less Messenger” t-shirt.

Next stop: Blue Bottle (160 Berry Street, Brooklyn, NY).  I live in Oakland, CA, and wanted to see what Blue Bottle was doing on the East Coast:

I was really impressed by the size of their space.  The natural light was great.  They roast in the back.  I’ve been to their kiosk in Hayes Valley in SF, the Cafe at Mint Plaza, their Ferry Building location, their old roastery in Emeryville and their farmers market in Temescal.  This space was absolutely huge in comparison.

There were quite a few people hanging outside too, enjoying the coffee and the weather: