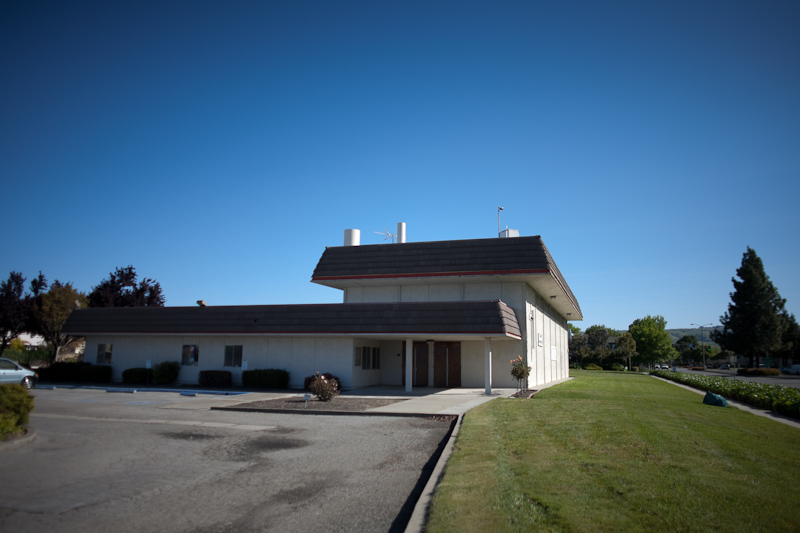 The Learning Tree, a preschool located on Paseo Padre Parkway at Fremont Blvd

I used Map my Ride to do the route.  It’s a little ad-heavy but has been generally improving.  I think I prefer bikemap but for some reason Map my Ride worked better this time. 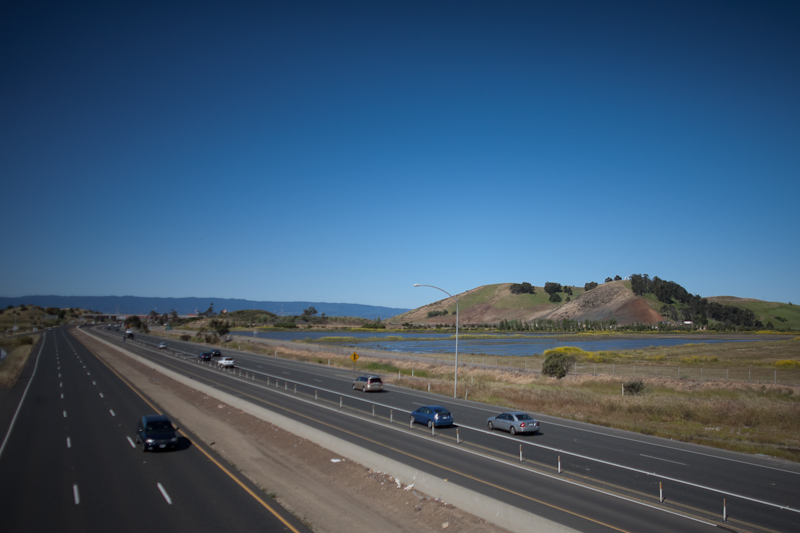 Riding on the overpass over Thornton Ave

It was around this point that I ran into some bike trouble.  My pannier, though built very nicely, doesn’t have a hook at the bottom to keep the base in place.  And it’s a rather long (tall) pannier.  As I was standing and swaying around a bit to get up the incline of one of these overpasses, the pannier got caught on a spoke and made a pretty horrible-sounding crunching sound.  I stopped and discovered that the wheel reflector had broken off (no big deal), a few spokes were bent (sorta big deal) and a fairly large hole had been ripped in the bag (a sorta big deal).  Luckily I had one of those delta cargo nets and a spoke wrench.  I put the cargo net on the outside of the pannier and then trued the wheel enough so that it was ride-able  and finally set off again.  It didn’t seem like a good start to the ride, though. 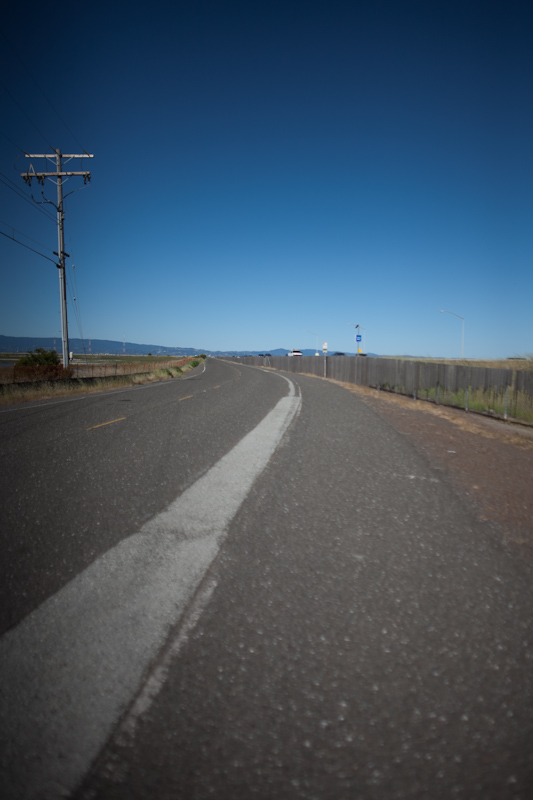 By this point, it looked like the wheel and pannier were holding up, so I continued.  This photo is from Marshlands Rd, which travels along the marshes and leads to the Dumbarton bridge.  The road kind of sucks for cycling – the asphalt is super bumpy.. but at least it’s isolated from most vehicular traffic. 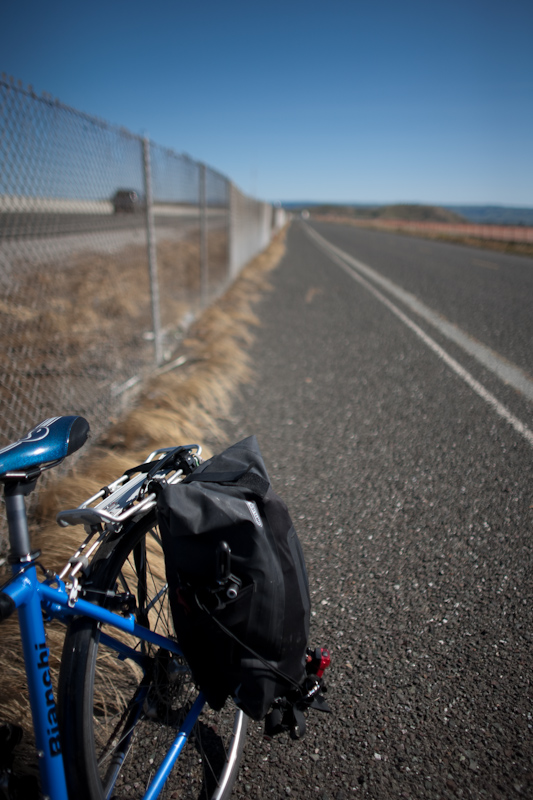 the pannier with the netting was not very pretty. 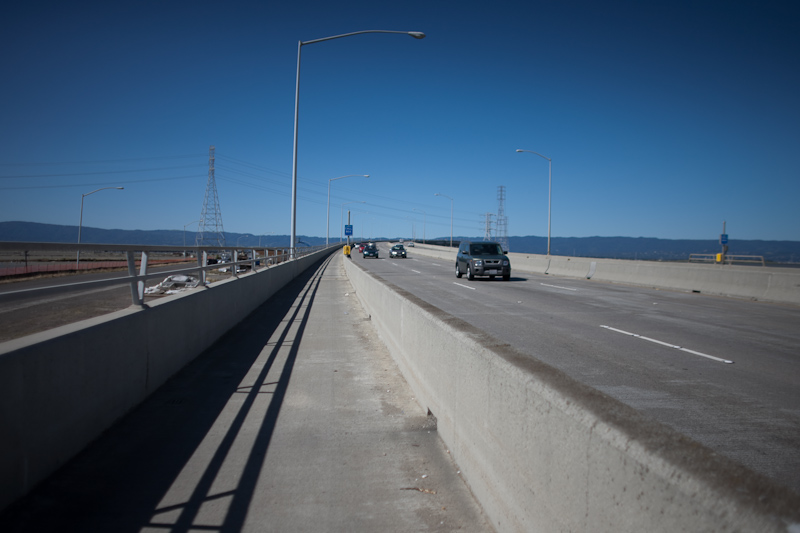 I’m glad that the Dumbarton bridge has a separate bike lane.  But it’s not very much fun to ride over.  Traffic is fairly loud as the cars are traveling highway speeds and it’s quite dusty.  The lane is decently wide though and I appreciate that there’s a large barrier between bikes and vehicular traffic.  On the east side of the bridge on the south side of the bay, there looks to be remnants of a pedestrian walkway that is no longer in use. 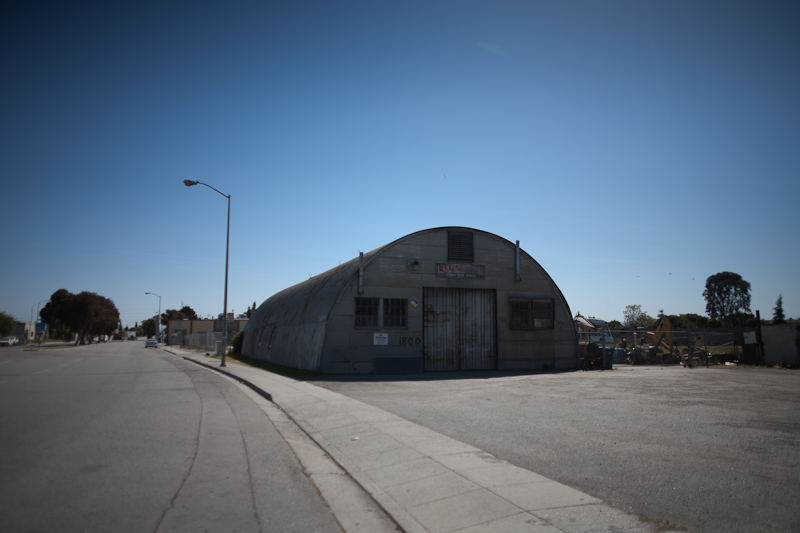 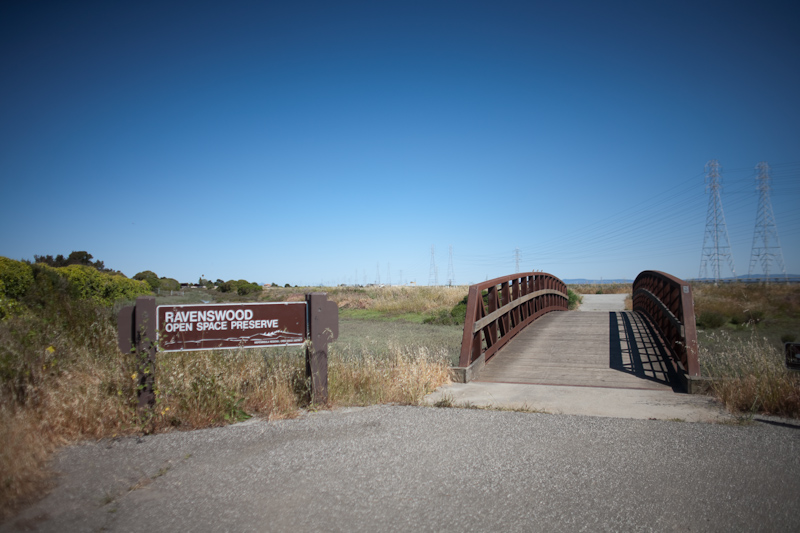 Here’s where the map (based on google maps) got a little sketchy. 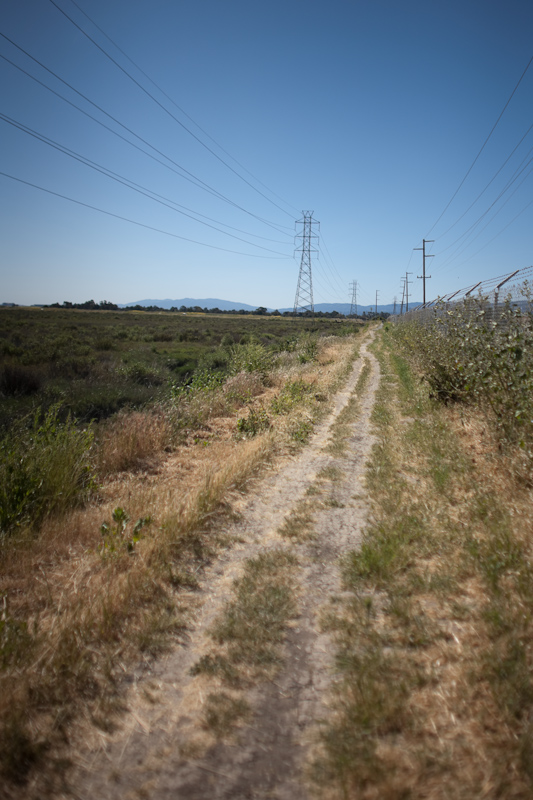 The bike trail from Bay rd to Weeks St

Google maps has this trail marked as dark green.  It was okay for me to ride over since I have 27 and 32-sized tires but it was a bit uncomfortable and I was a worried that the rest of the ride along the shore would turn out to be like this.  It’d be fine for a mountain bike though. 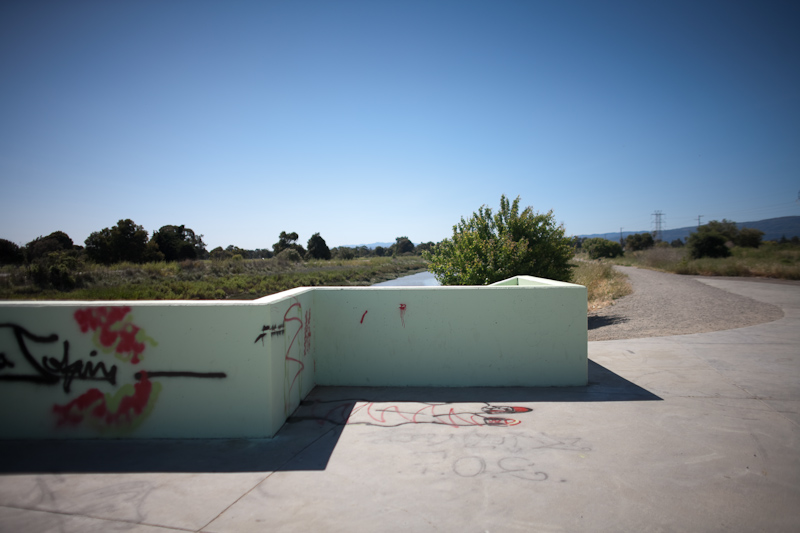 The bumpy trail eventually led to a paved trail and all was good again. 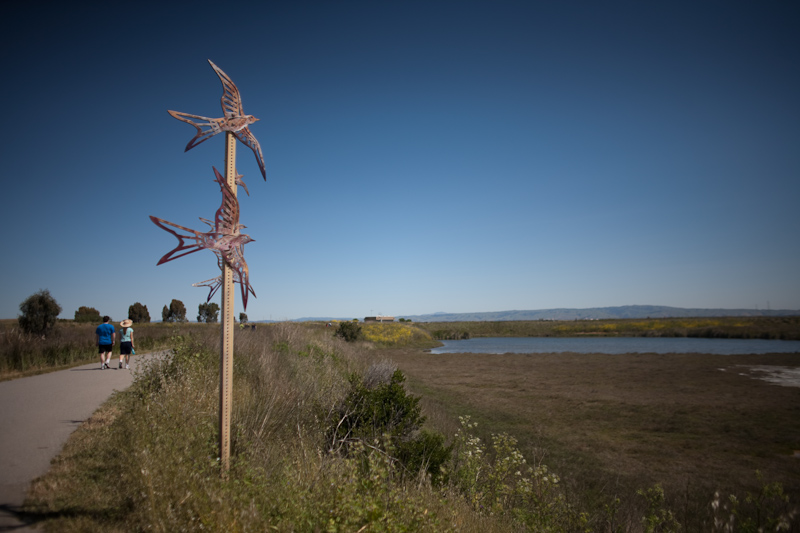 I think this is from Palo Alto Baylands Park. 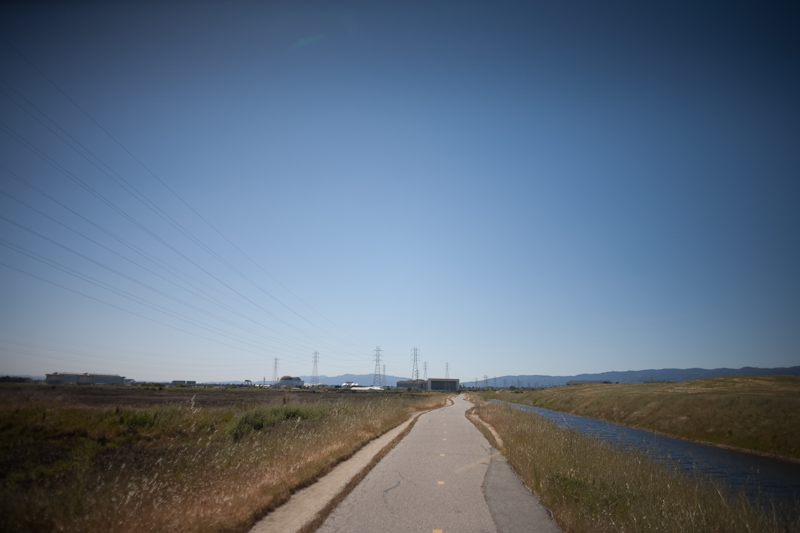 It’s a super flat area but a bit windy and doesn’t have too much variety.  Some of the riding was along the San Francisco Bay Trail. 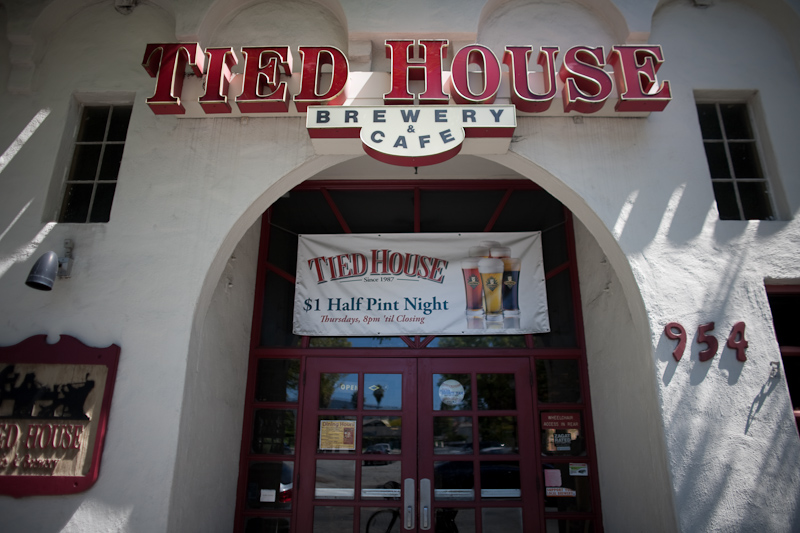 After a short ride on the Stevens Creek Trail, which was pretty nice, I arrived at the meeting point for the start of the grand cru ride: The Tied House Brewery & Cafe. 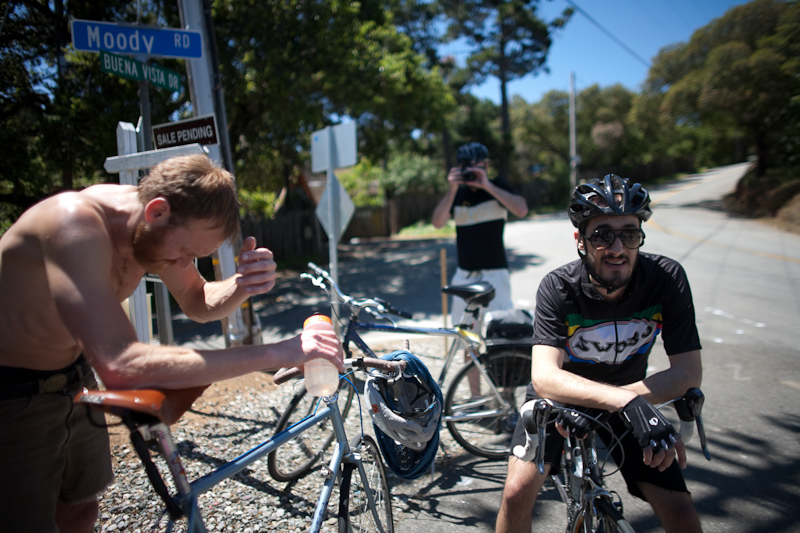 we rode up moody rd, which was a bit of a climb.  I’ll post more pictures from that portion of the ride on the grand cru website. 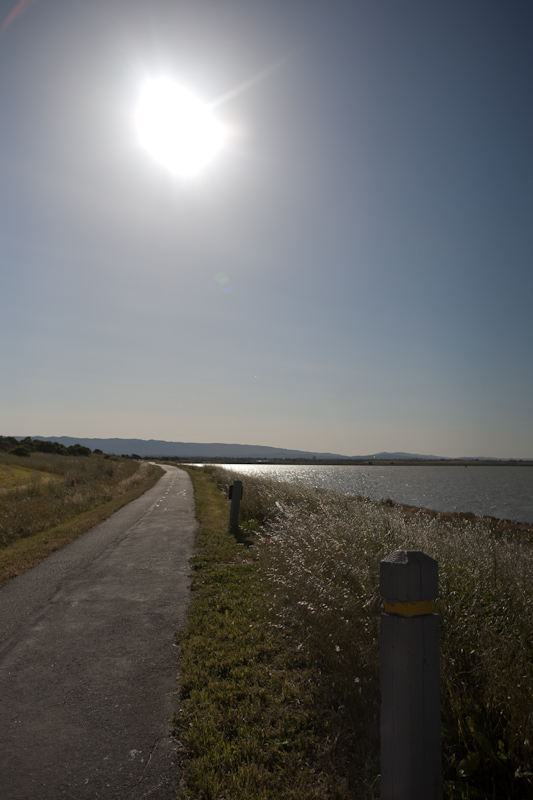 after the ride and a burger and beer, I headed back for Union City.

I had just turned off of Stevens Creek Trail at this point. 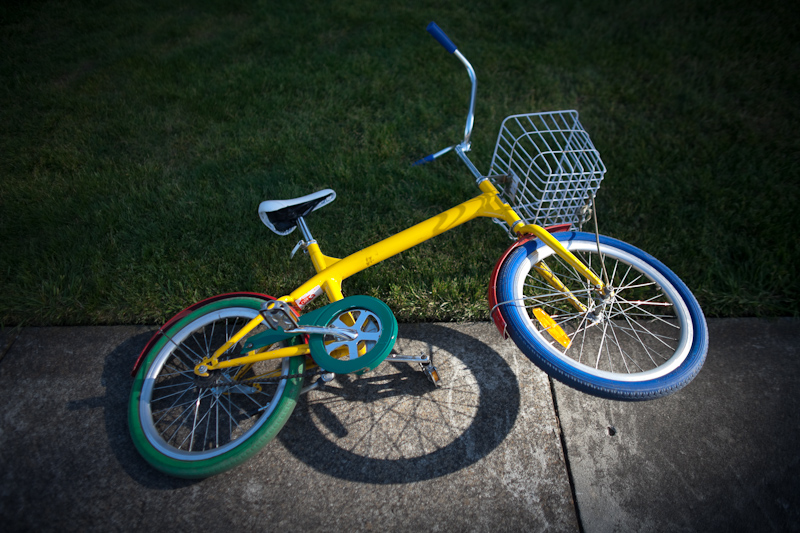 I decided to take a tour through the Googleplex.  These little bikes were everywhere.  They’re apparently free to borrow for getting around the campus. 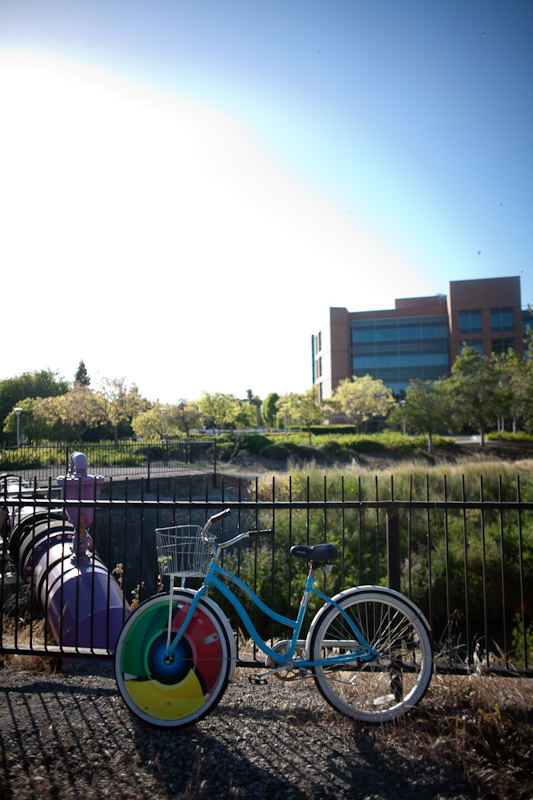 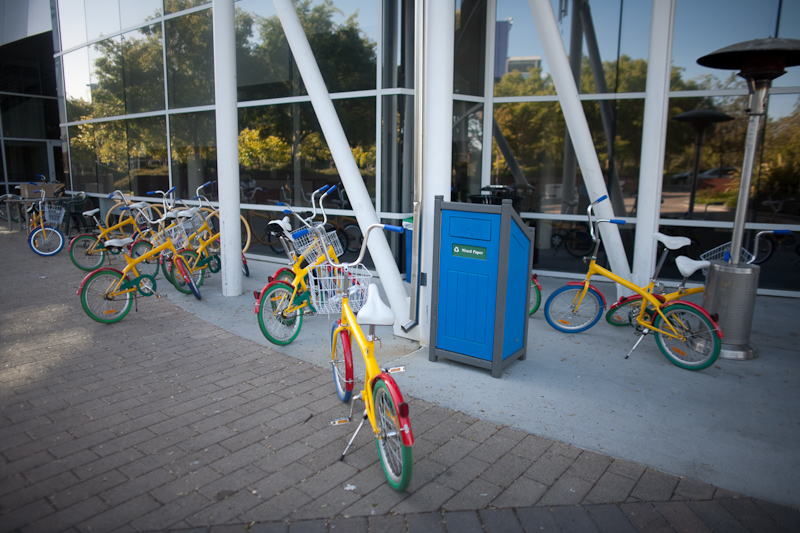 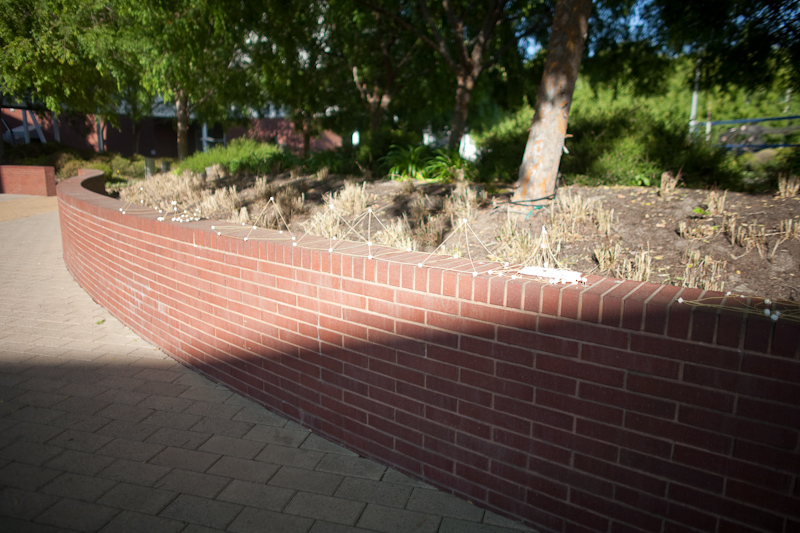 marshmallow and spaghetti pyramids!  I was a little excited to see this. 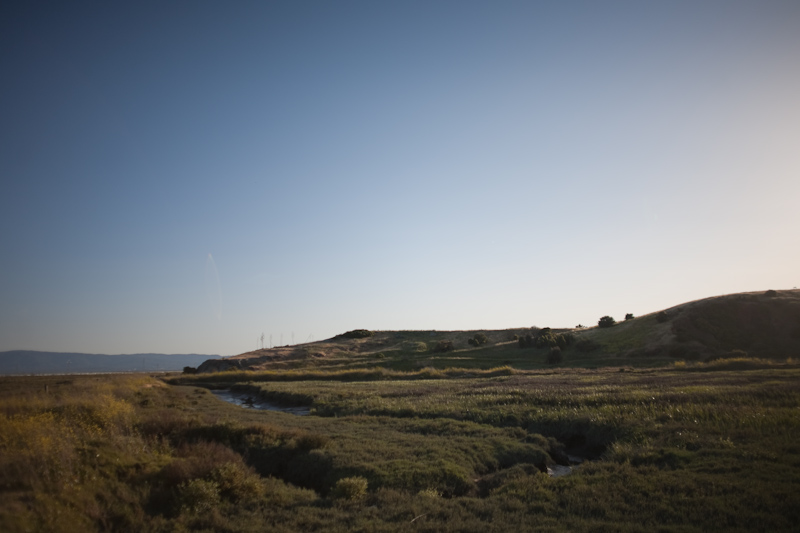 at the end of Marhlands Rd, a bit before sundown

The rest of the ride wasn’t that interesting.  I was feeling a bit uncomfortable from riding such a long distance on my commuter, and between back fatigue, leg fatigue and the headwinds, I was ready to be home.  I put my head down and pushed through the rest of the ride.  I made it back to Union City BART before the sun went down and all in all did about 80 miles.  It was definitely an interesting ride but not one of my best.