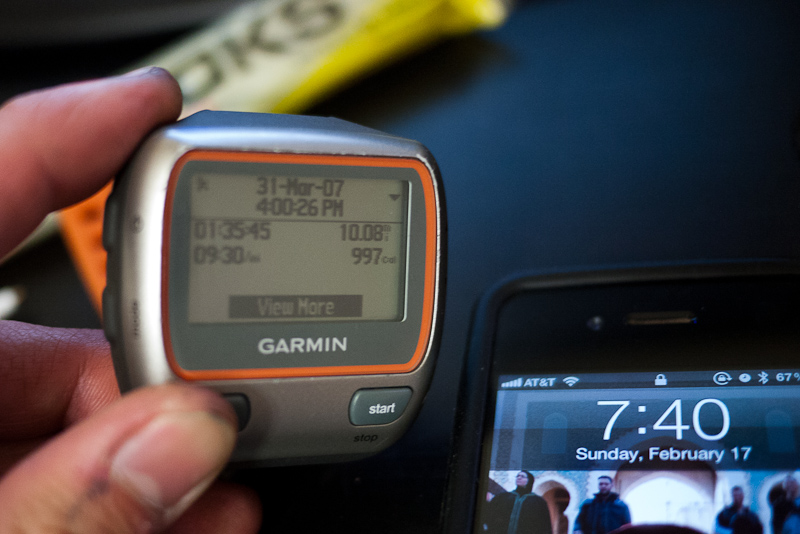 I’ve been having a lot of problems with my Garmin Forerunner 310XT.  Generally, it is still useful for tracking my workouts and following courses, but it has been very frustrating to use.  Here are some of the things it does wrong:

The unit turns on by itself while connected to the computer.

Sometimes while it is charging, I’ll hear a loud buzzing near the computer and check the unit.  It’ll be on and trying to get a GPS signal.  Even when the computer is off, and the unit is still connected via USB, the 310XT will turn itself on.   By the time I use the 310XT, the battery is dead.  This has happened many times to me.

Getting a GPS signal takes a long time.

It usually takes the unit about 30 seconds to start up.  This seems really slow.  But after that, sometimes it will take perhaps 2 minutes just to find a GPS signal.  I can’t turn the unit on ahead of time to get around this as there generally is not GPS reception indoors.

Sometimes, the unit takes about 10 minutes to boot.

The 310XT gets stuck on its boot screen where it displays the Garmin logo.  This happens about 5-10% of the time.  I try to wait for a few minutes in hopes that the unit will boot but usually start my run with the unit still stuck on its boot screen.  After an additional 5 to 10 minutes or so, the unit finally boots and works normally.  Update: This happened again, two times in a row.  I estimate that it took about 15 minutes to boot up and work normally each time.. which made it pretty useless for my runs.

Even when there is definitely new data available, the Garmin ANT Agent screen will display:

Unless I un-pair and re-pair my device, data won’t be transferred from the 310XT to my computer.  Even when I do this, sometimes I can’t transfer data.  The .FIT and .TCX files are downloaded to my PC, but they don’t go into Training Center.

I eventually tried resetting the 310XT to fix the problem.  I was able to transfer data well for about a month.  Then, the same problem started happening again – the 310XT would transfer data to my computer but I could not get the data into Garmin Training Center.  I tried re-pairing multiple times but had no success.

I think I’ve made some progress in figuring out why this doesn’t work.  It seems that one of the XML files, GarminDevice.XML is not correct.  I tried copying another version that exists on my PC over, and the data transfer started to work as soon as I restarted ANT Agent.  I’ll update this as I make more progress.

This is how you reset the 310XT (WATCH OUT! ALL DATA WILL BE ERASED):

4) Press and release Lap/Reset (watch will turn off)

While I was having trouble transferring data, I decided to take a look at my Activities History on the watch.  According to my watch, all of my runs in the last 3 weeks happened “Yesterday”, each 2 minutes apart.  I turned the watch off, and turned it back on.  The date of the Activities changed to March 31st, 2007.  I suspected that the date was wrong because the GPS gets its time/date information from the GPS satellites, but the unit showed good satellite signal with 24 ft accuracy.  Also, the time the GPS unit displayed was correct.

This isn’t as big of a problem, but apparently humid air can enter the unit and condense on the inside of the screen.  This usually goes away after a few minutes.

I don’t remember if this happened before, but usually the screen displays a charging status indicator (64%, for example) when it is charging.  I came back to check on the 310XT’s charging status and the screen was completely blank.  I have no idea if it is actually charging or not, or if the unit has crashed.  To turn it on again, I had to do some combination of removing it from the charger, hitting the power button, then placing it back in the charger.

I ran a half marathon, and when I tried to transfer the data to my PC, I ran into all of the problems I’ve mentioned.  Somehow all of the connecting and disconnecting from the charger caused the 310XT to 1) delete my half marathon from record 2) reassign the date of all of my other activities to today.  This is intensely frustrating, as I wanted to see my splits and my heart rate from the race.  I noticed that in addition, my setup for the screens (to display heart rate, pace, total time, etc) had been reset to the default.  Argh.

I can’t send courses to the device, and Garmin Express doesn’t even work.

I can’t connect to my 310XT at all via Training Center, so I decided to bite the bullet and use Garmin Connect.  I downloaded Garmin Express, and spent 45 minutes trying to get the utility to pair with my 310XT.  It sometimes detects the 310XT, it sometimes doesn’t.  When it does, it tries to pair.  I enabled pairing on my 310xt and the 310XT displays “Transferring Data” and then Garmin Express tells me that pairing was unsuccessful.  I tried the Garmin Communicator Plugin, and it can’t find my device. (how many different ways did Garmin make to communicate with this device that still don’t work at all?!)

Would I buy one again?

Definitely not.  It has a lot of potential, and I like the idea of being able to track my activities and heart rate, but there are too many problems and glitches and headaches associated with using the 310XT.  It’s buggy and has a lot of quirks that make it feel like an unfinished beta product.

The funny thing about the bugginess of the 310XT is that it’s still for sale on Garmin’s website as of March 2014.  They haven’t updated its firmware since July, 2012.  I find it kind of shocking that they haven’t put effort into fixing the issues I’ve experienced, and I don’t have a lot of confidence that Garmin will ever fix them, since it’s been nearly 2 years since they’ve touched the firmware of the product.  This makes me a little uncomfortable when considering purchasing their other products as well.

Does anyone else have any of these problems?

Please leave a comment with your experiences.  I haven’t found anything similar online.

Hayward to San Jose to Fremont

86 thoughts on “A list of Garmin Forerunner 310XT Problems, how to fix some of them, and why I can’t let myself buy another Garmin device”