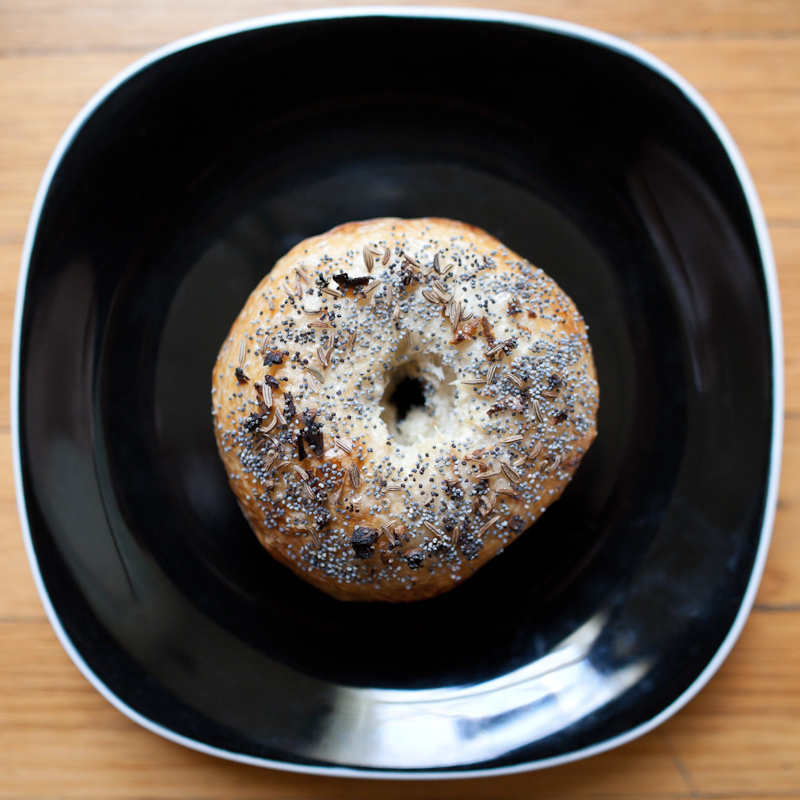 Wow, a lot has changed since my last try at making bagels.  My version 0.2 post was more than a year ago!  (Also see the sad version 0.1)

What’s different this time around?

– I used a sourdough starter instead of conventional active-dry yeast.

– I now use a Kitchenaid stand mixer instead of kneading by hand.  Much easier, especially with a dry dough like bagel dough.  (Shout out to Angry Man Eats for making the stand mixer happen.  The blender and mixer still live together.)

– I did the recipe by weight and used a 55% hydration ratio.

– I left the bagels to proof for 24 hours in the fridge.  The 24 hours was mostly out of convenience – I couldn’t bake until then.  I don’t think I had them proof at all last time.

– I had poppy seeds and caraway seeds this time around

How’d they turn out?

– The crust was a bit crispier than last time.  I’m not sure the cause.. will have to do some research.  Baking Bread 101 says it’s because there wasn’t enough steam in the oven, but I did bake over a pan of water.  Then again, maybe it was crispy because I ate the bagel 5 minutes after I took it out of the oven.  The bagels were much less crispy and quite a bit chewier the next day.

– Also, the crust in the center of the bagel tore.  I am not sure what caused this either, other than the crust couldn’t expand as fast as the oven spring wanted it to.  Perhaps I could bake at a lower temperature to stop the crust from forming so soon.  Or maybe I boiled for too long?  Sobachatina’s answer on Stack Exchange has some good tips.  I can’t really slash the bagels though.

– The bagels were much smoother than last time.  I think this was due to the fact that I actually proofed them and probably did a better job kneading. . or at least the mixer did a better job.

– They tasted great and the torn (and crispy) crust doesn’t really bother me.

For anyone who is interested (and since I typed this up for Sean anyways), here is what I did:

– Refreshed starter for 2 cycles – I hadn’t baked in 3-4 weeks, I think, so it needed some love.  S
– Mixed ingredients, kneaded in kitchenaid stand mixer:
[table “” not found /]

– I set the dough out to rise overnight (about 8h) at room temperature (about 65F).  In the morning, the dough hadn’t risen much – it spread out a bunch though and increased in volume by  maybe 75%.   I figured that this might happen since I used such a large quantity of starter.
– Formed dough into balls
– Proofed in fridge, covered, for about 12 hours
– Put holes in the balls, stretched them to get the bagel shape
– Boiled each bagel in a pan with ~1 inch of water and 1 tablespoon of brown sugar for 1 minute on each side
– Added toppings
– Baked at 450F for 25 minutes, uncovered, with a pan of water underneath the bagel pan