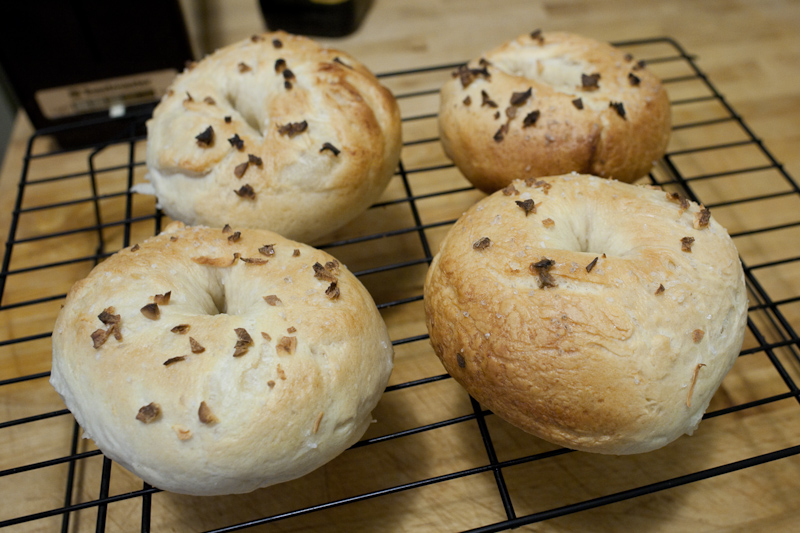 I made some tweaks after my last attempt at homemade bagels didn’t turn out as well as I had liked.  I figured that there wasn’t the right proportion of water in the last batch.  The dough was too dry, which made it nearly impossible to work with, leading to lumpy bagels.  I also had probably baked them for a little too long.  This time, I set out to try the same King Arthur recipe again with a few changes:

-I split the dough into two batches, with two different hydration ratios

-I boiled the bagels instead of trying to steam them

-I baked for less time 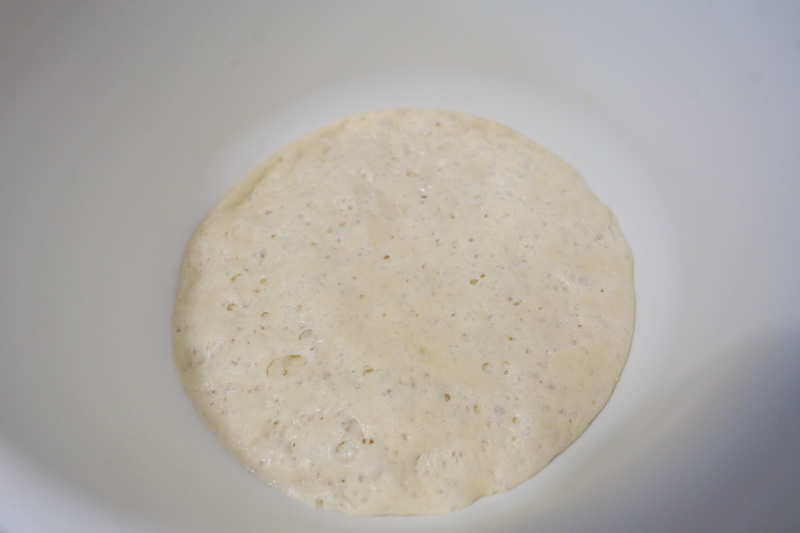 I didn’t adjust the starter recipe, but it looks less dry this time.  The difference is probably due to the fact that I still measured flour by volume rather than weight.  It may also have been a bit warmer. 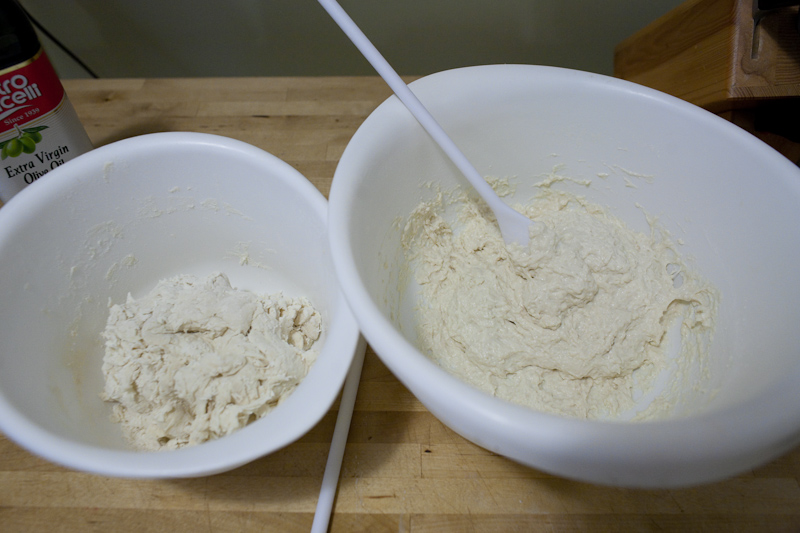 I decided to aim for a target hydration ratios (amount of water/amount of flour) of 40% (left) and 60% (right).  I think I did some math wrong and ended up with ratios of 38% and 51%.  I didn’t know at the time that I think most hydration ratios cited in other sources are by weight.  By weight, the dough had ratios of 56% (right in bagel territory) and 76% (higher than ciabatta territory!). 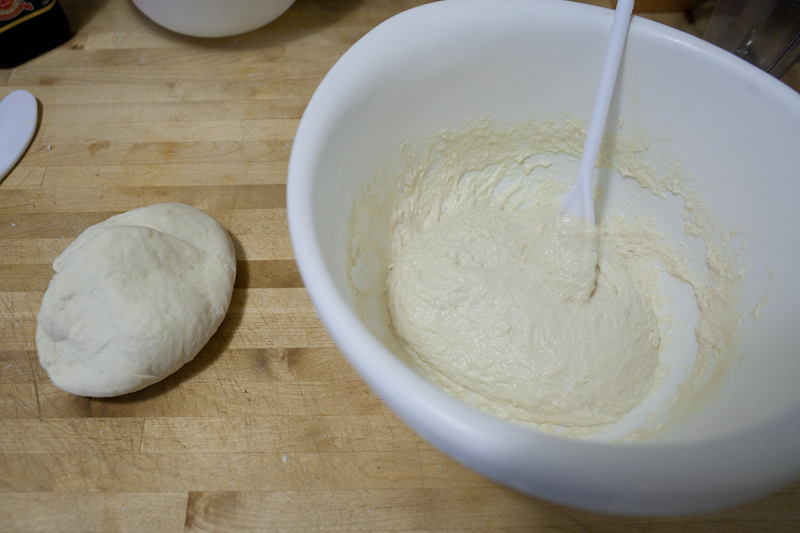 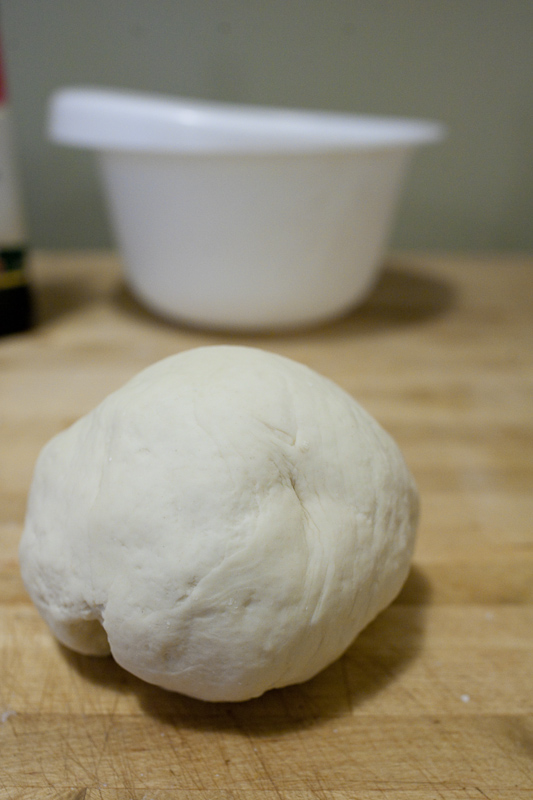 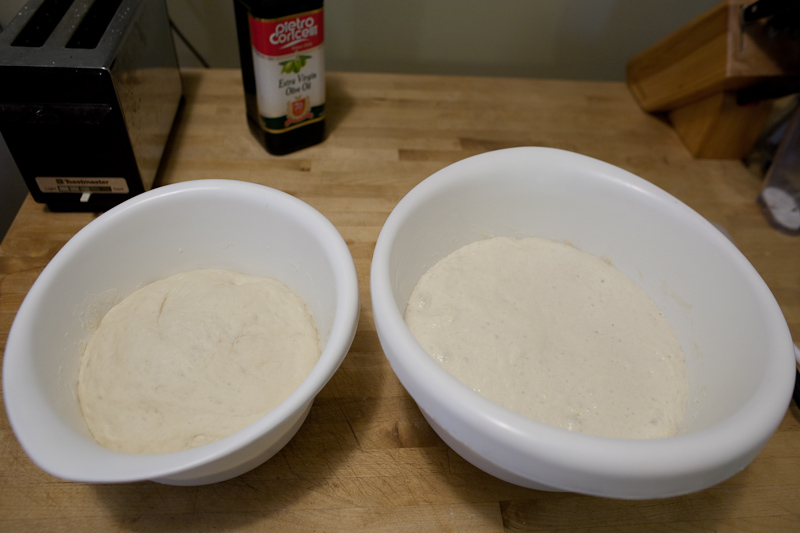 Here’s a photo of the doughs after a 90 minute rise.  The dough on the right looks like oobleck. 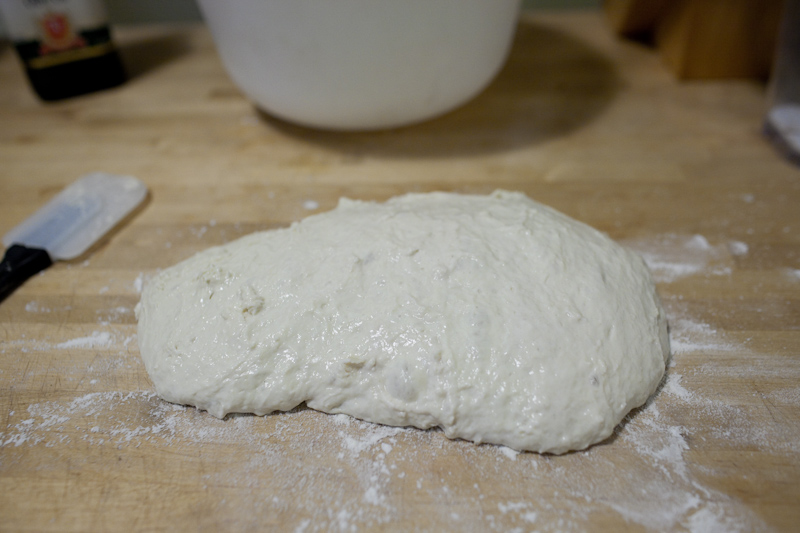 I had to add a lot of flour to even be able to work the wet dough. 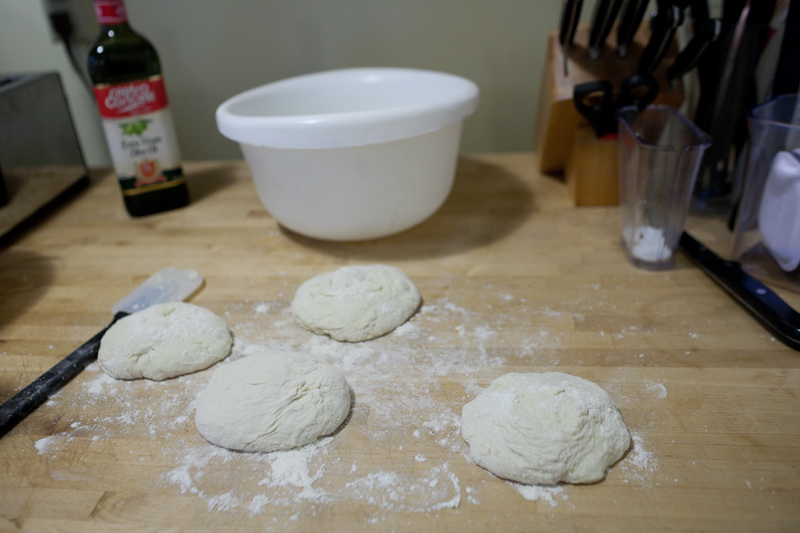 I tried shaping the dough into bagel balls, but it just wasn’t possible.  They did look very capable of a pizza dough, though! 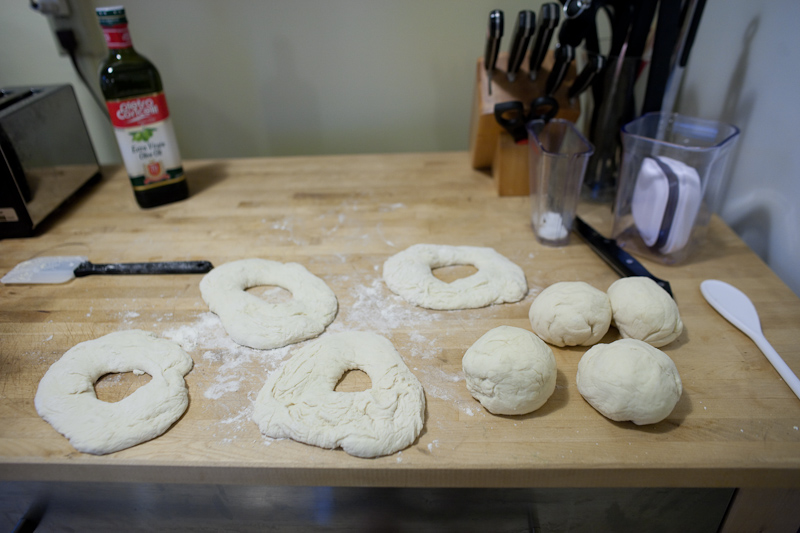 The drier dough (now on the right hand side) was much easier to shape. 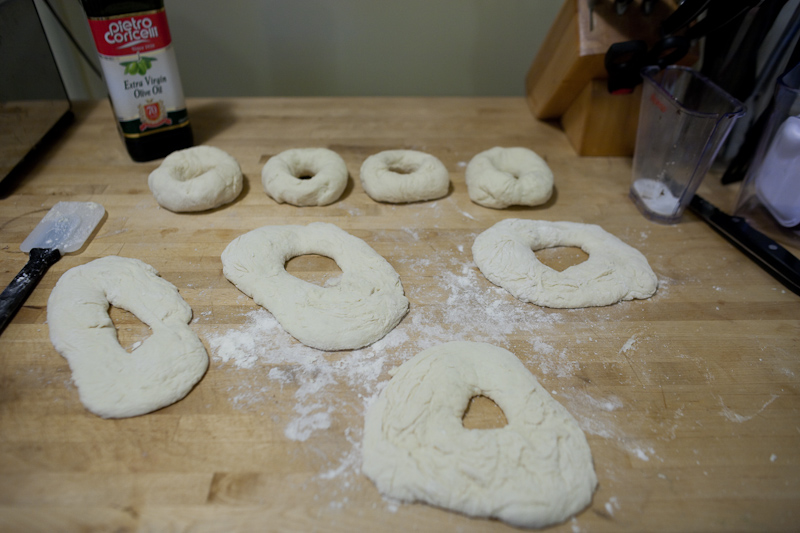 I had to add a ton of flour to have these guys not stick to my hands or the counter. 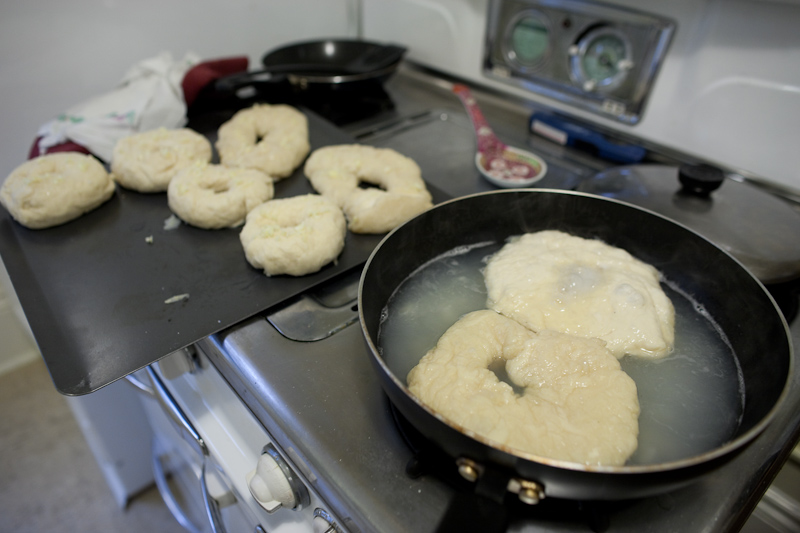 Boiling went okay.  I used regular sugar instead of brown sugar or malt powder, which wasn’t that great of a move.  The goopy and floppy wet bagels ended up absorbing a lot of the sugar and had too sweet of a taste to them in the end.  They kind of reminded me of dumplings.  The drier bagels still had some wrinkles but were a  lot smoother than the last batch I made. 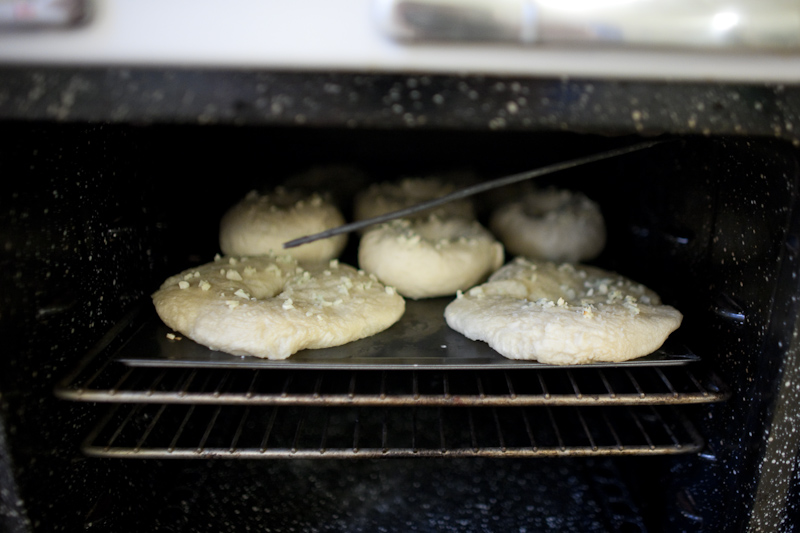 Once again, I coated them all in garlic and sea salt. 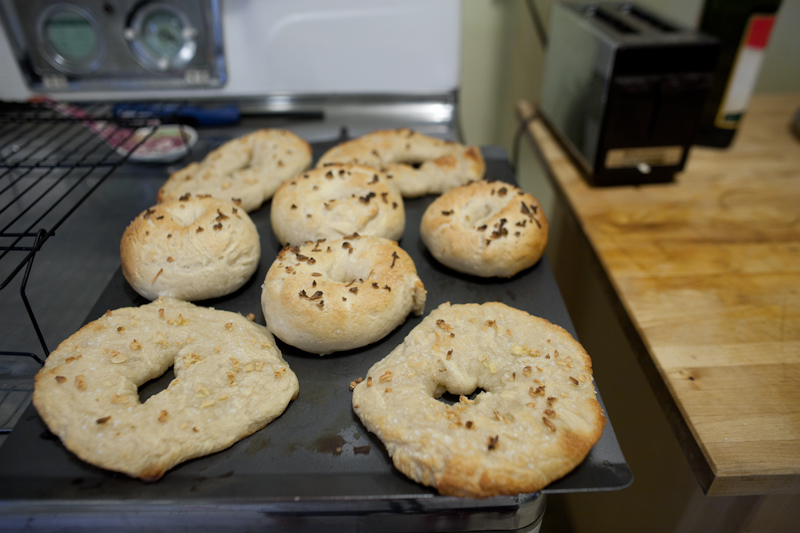 Bagels, baked.  The “wet” ones really reminded me of pizza.

Here’s the batch from the drier dough.  I thought they looked pretty great!  They felt good too – the last batch had a bit of a hollow, hardened feel to them.  These felt softer and.. bagely.  The crust was still a bit hard but not too hard.  Note that the garlic is slightly burnt – which is fine with me.  I think I started with frozen garlic chunks to slow their baking/burning process down a bit so that they weren’t completely charred at the end. 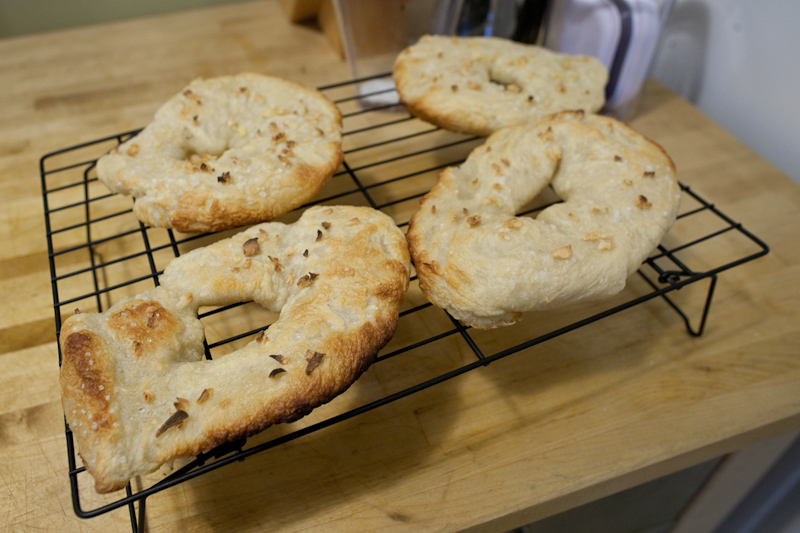 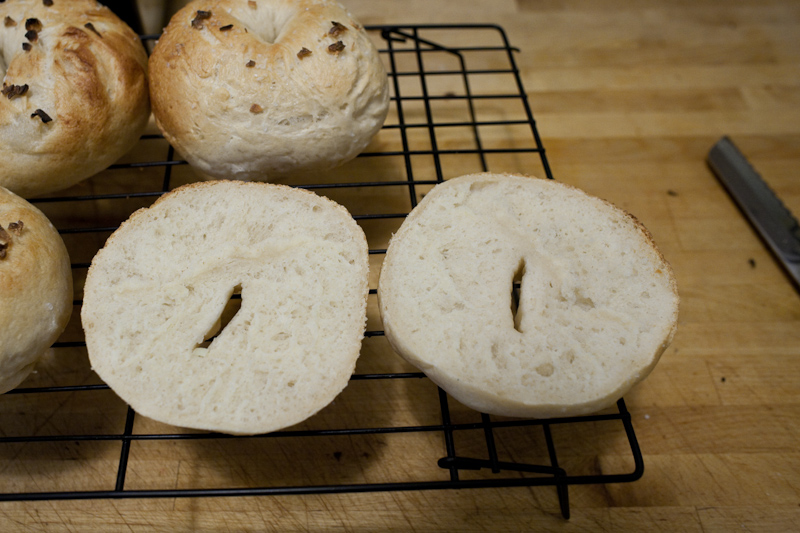 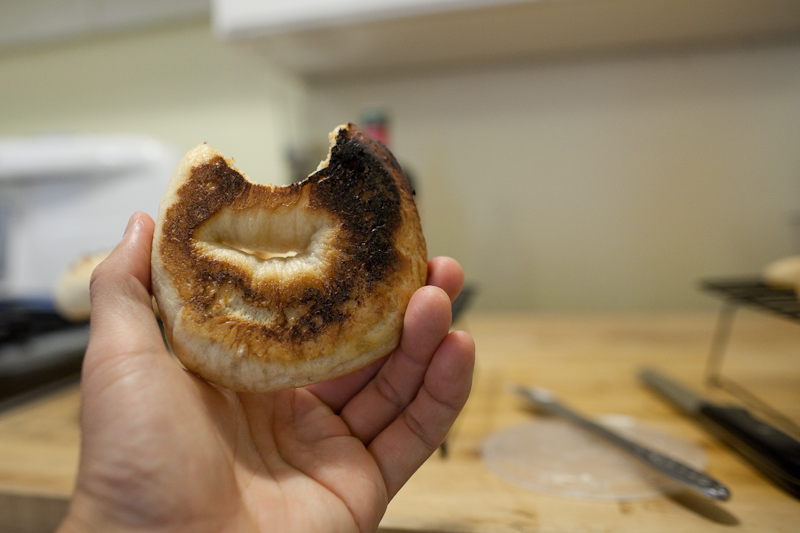 I burned the bottom a bit, and they stuck a bit.  I should have applied cornmeal more liberally. 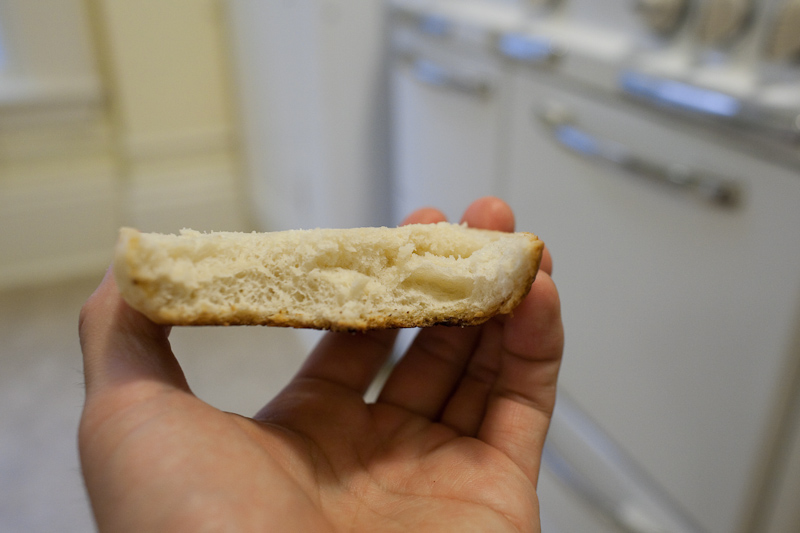 I didn’t bother taking pictures of the “wet dough” bagels, but they tasted okay – like a super chewy pizza crust.  One or two of them were a little too doughy inside maybe because they took on too much additional water in the boiling process.  I wasn’t too unhappy though – I ended using the higher hydration recipe for pizza dough.  More to come in Part 3!

4 thoughts on “Bagels v0.2 – A hydration experiment with good results”