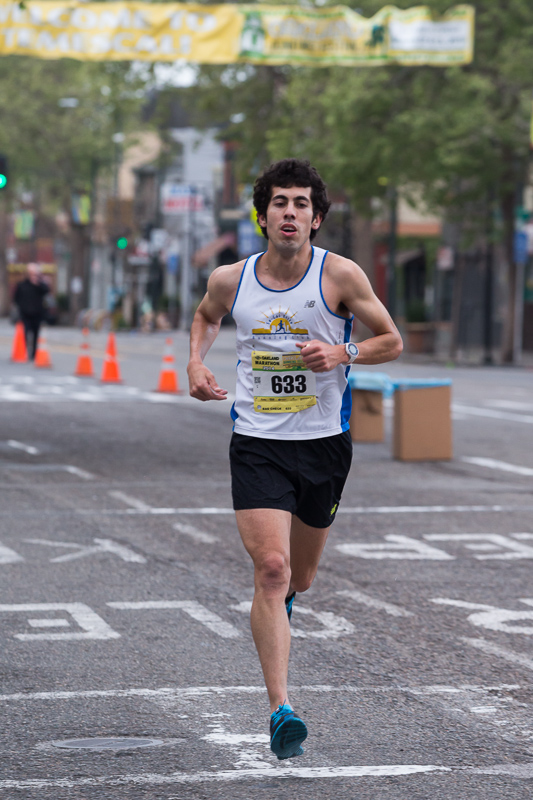 We stepped outside around 8 this morning to catch Oakland marathon runners around mile 5. 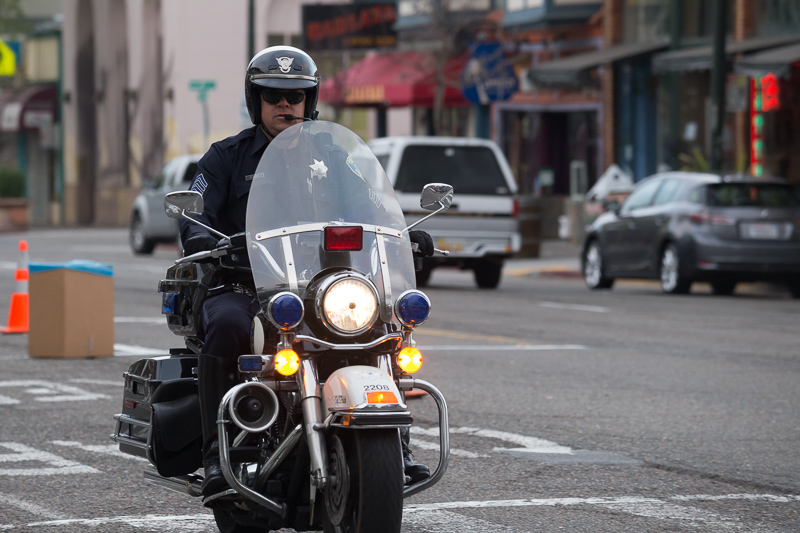 This guy from the Oakland-based Bay Area Track Club relay team was minutes in front of anyone else at this point.  Not surprisingly, they went on to win the relay with a final time of 2:20:54. 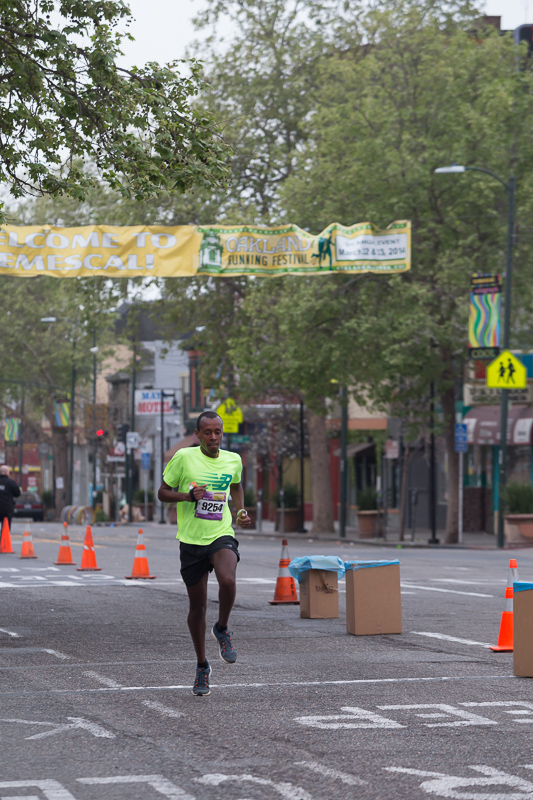 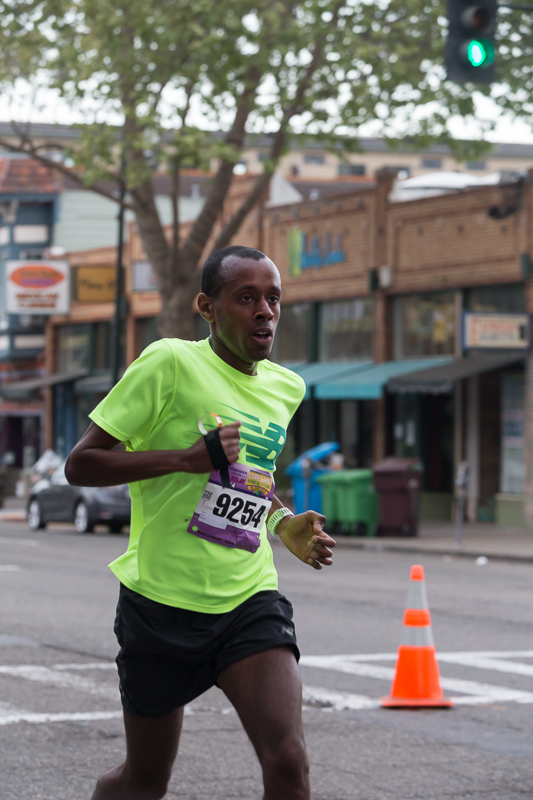 These guys did very well too – “That’s Fine Track Club” from San Francisco finished second in the relay results, with a time of 2:24:31. 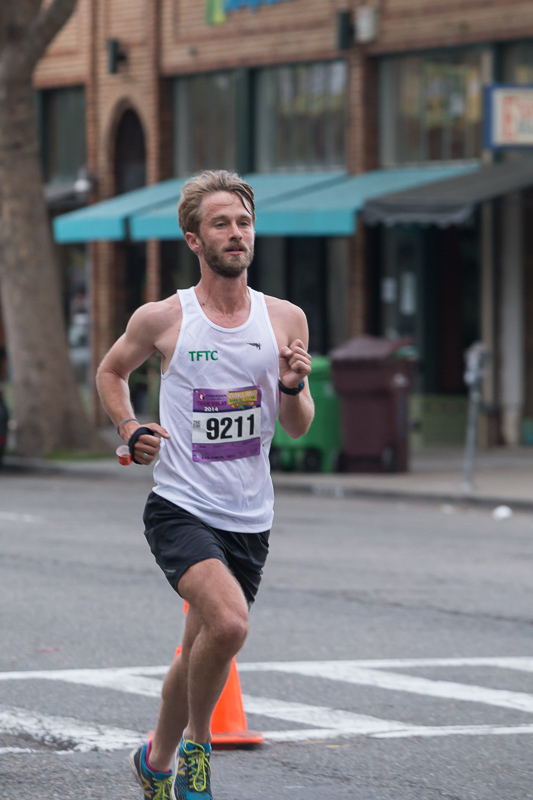 A small pack of solo-marathoners came next.  Here’s Rob Nachtwey from Berkeley in the pink hat, with Chris Mocko close behind, wearing the red headband.   Chis had won the marathon in 2012 with a time of 2:28:09, but apparently dropped out of the race and registered a DNF this year.  Rob Nachtwey went on to finish second place with a time of 2:41:00 – his second straight second place finish.  Well done, Rob.  It’s neat that the official race results show splits – Rob appears to have spent the entire race consistently in second place. 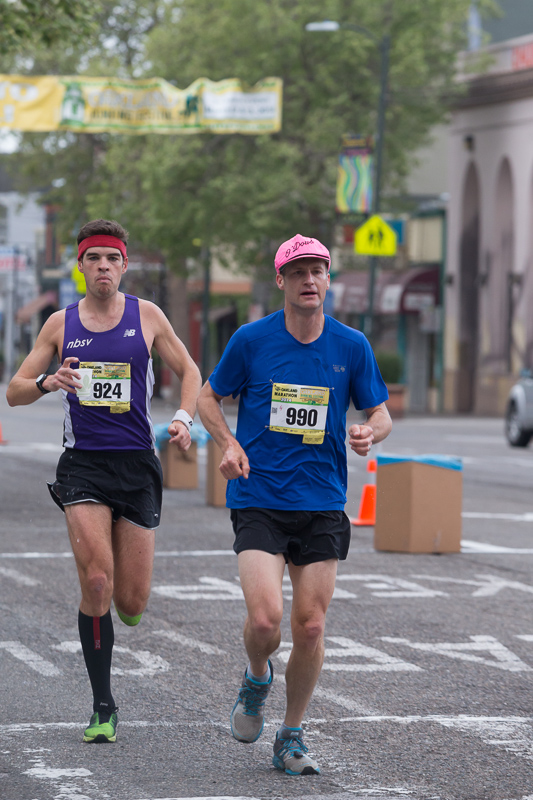 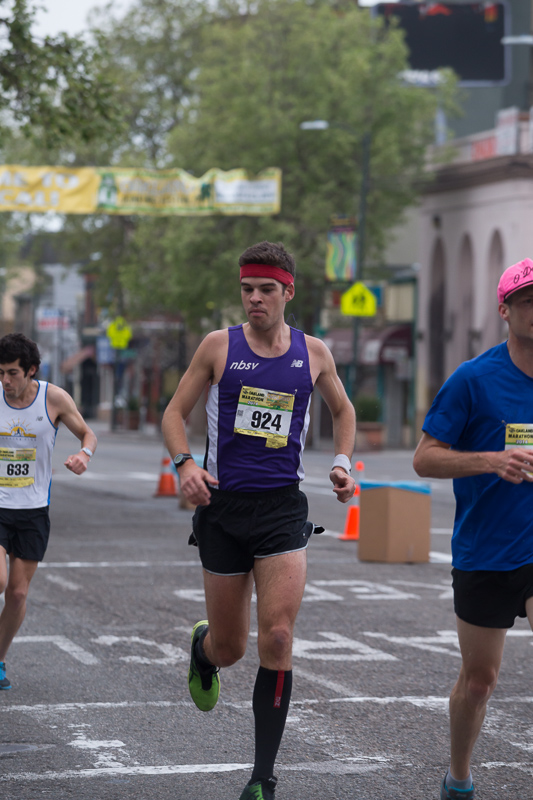 This is Eulogio Rodriguez from Whittier, who was only footsteps behind in the pack.  He hung out in 3rd for a while, but was up by more than 2 minutes by mile 12, and finished the race 10 minutes and 37 seconds ahead of Rob Nachtwey, with a time of 2:30:22.21. 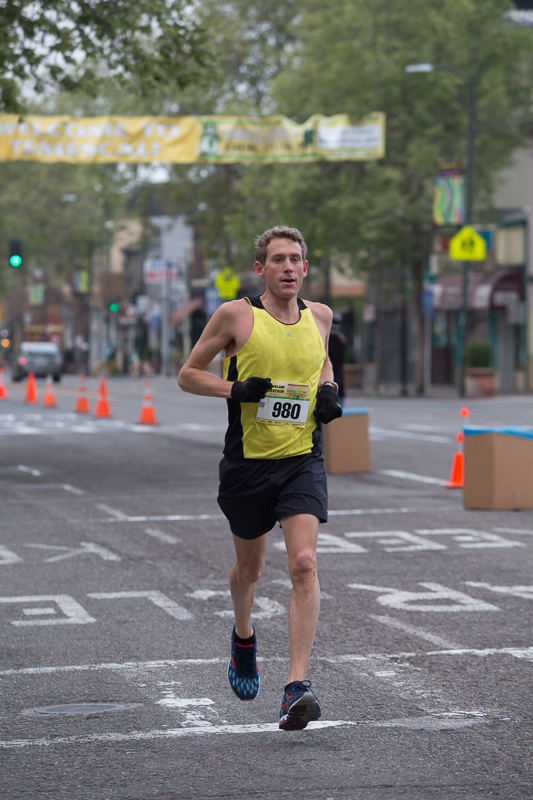 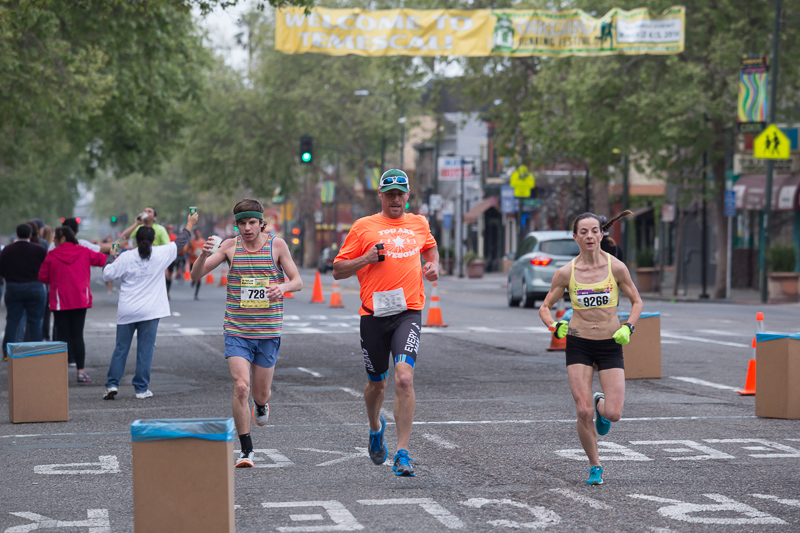 This is Robbie Salazar, of Pueblo, Colorado who finished in 6th place. 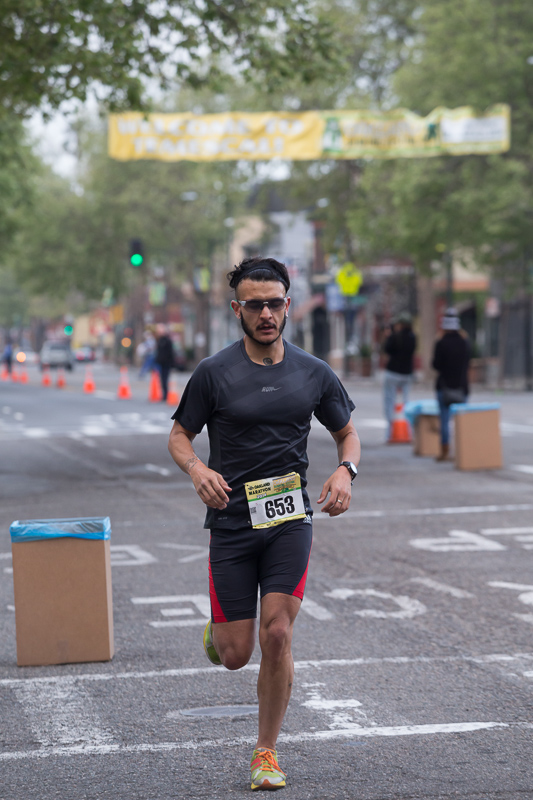 This guy didn’t have a bib, but made up for it with a black Raiders cape. 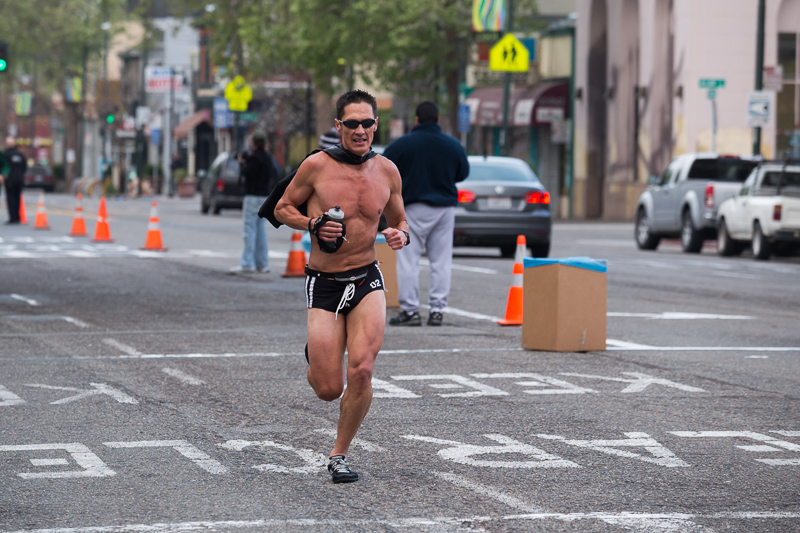 This guy blue himself.  – Team Reservoir Dogs from Oakland. 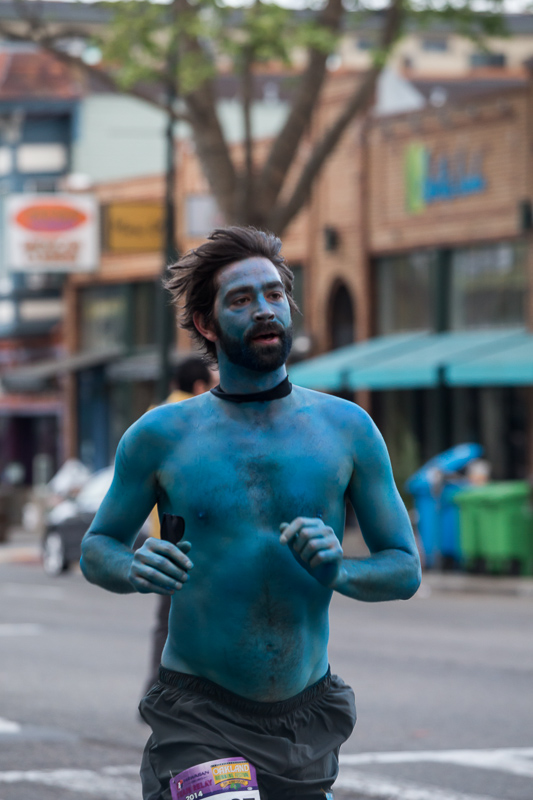 The woman on the right is Jen Bakula, who finished 6th among women. 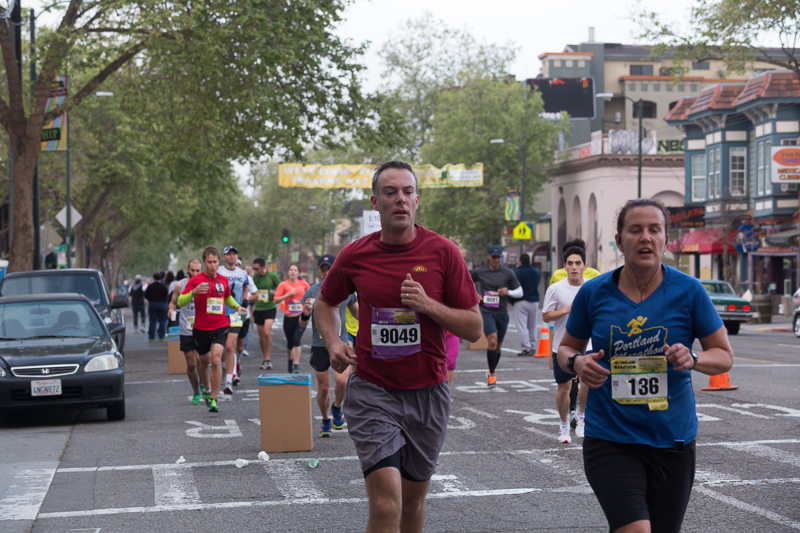 Verity Breen won the half marathon in 2011 and returned this year to finish in 2nd place among women, with a time of 3:22:13.  She was in 4th, or maybe even a bit further back at this point, but made her way up to second within a few miles. 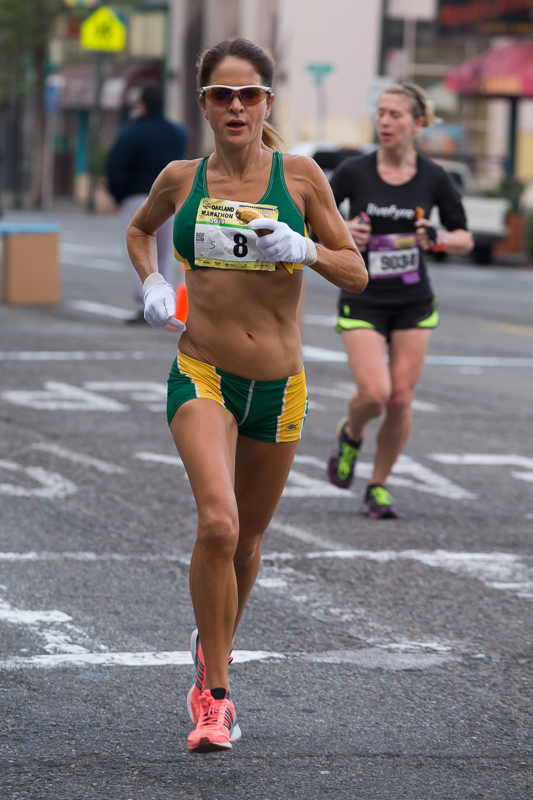 And of course, Hawaiian shirt guy was running again. 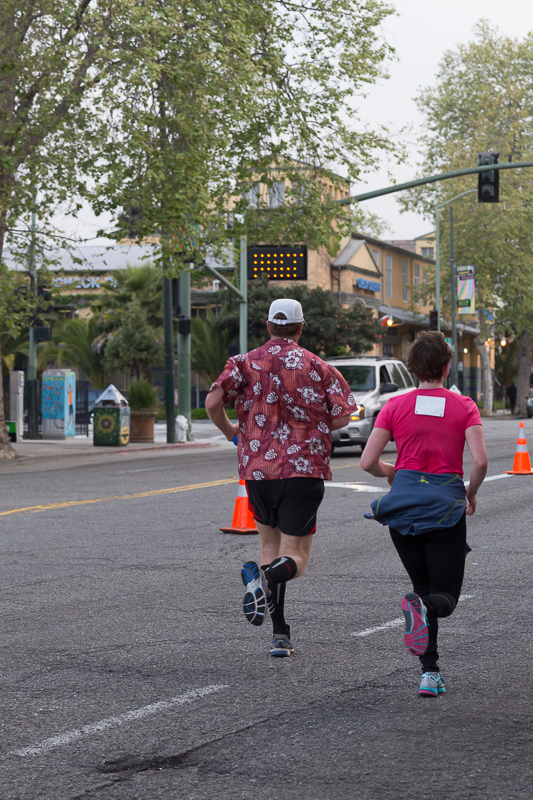 Photos from the 2013 Oakland Marathon