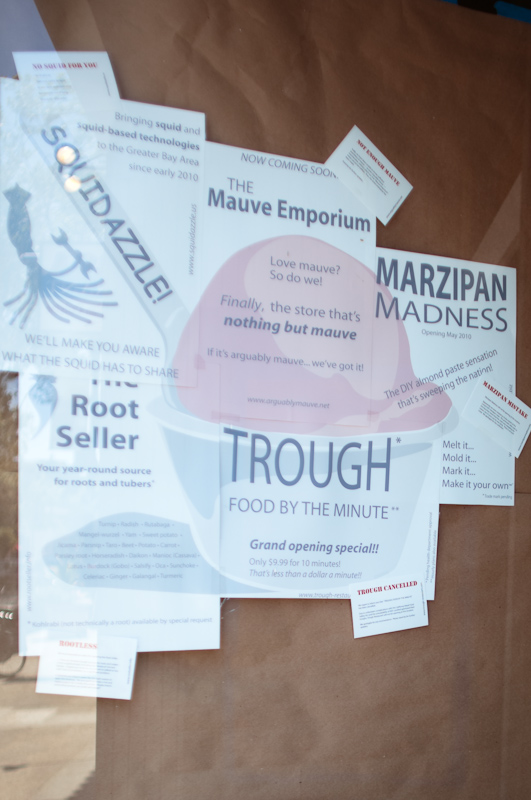 update: you can expect to see some wild-looking mugs at miam.maim: http://www.unitedbrands.us/miam/miammiam-mugs/fallseries.html

yet-to-open cafe/lounge miam.miam (5856 college ave)  just posted a huge blue bottle banner in their window.  after having a banner in the window promising frozen yogurt in “summer 2009” and then “holiday 2009” from peeks into their front door, it looks like they’re finally getting closer to opening.   The huge banner is a little misleading – the size of it makes you think that blue bottle is actually opening at that location, but not so.

Bittersweet, just down the street also serves blue bottle (or at least they did last time I was there), so miam.miam isn’t alone.

this gets me to thinking – blue bottle’s got a pretty strong brand going if cafes are clamoring to serve their coffee and use it in their advertising, right?

on a slightly related note, scream sorbet is opening up a shop at 51st and telegraph in temescal (5030 telegraph ave), 2 doors down from bakesale betty.  they’re scheduled to open in June, according to a not-fake poster.

they’ve got a hilarious set of fake posters in the window:

“squidazzle!  Bringing squid and squid-based technologies to the greater bay area since early 2010.  We’ll make you aware what the squid has to share”

“the root seller: your year-roud source for roots and tubers”

“the mauve emporium: love mauve? so do we!  finally, the store that’s nothing but mauve.  If it’s arguably mauve… we’ve got it!”